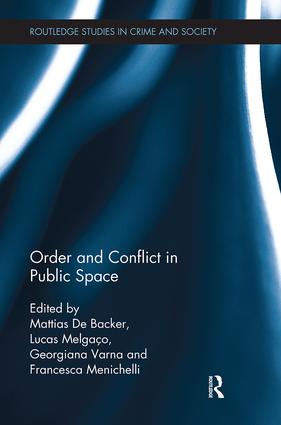 Order and Conflict in Public Space

Which public and whose space? The understanding of public space as an arena where individuals can claim full use and access hides a reality of constant negotiation, conflict and surveillance. This collection uses case studies concerning the management, use, and transgression of public space to invite reflection on the way in which everyday social interaction is framed and shaped by the physical environment and vice versa. International experts from fields including geography, criminology, sociology and urban studies come together to debate the concepts of order and conflict in public space.

This book is divided into two parts: spaces of control, and spaces of transgression. Section I focuses on formal and informal surveillance and the politics of control, using case studies to compare strategies in spaces including Olympic cities, luxury skyscrapers, residential neighbourhoods and shopping malls. Section II focuses on transgressive or deviant behaviour in public spaces, with case studies examining behaviour in nightlife districts, governance of homelessness, boy-racer culture and abortion protests. The epilogue concludes the book with an exploration of possible future avenues for research on public space, and a critical appraisal of the concept of public space itself.

This interdisciplinary collection will be of interest to students, researchers and professionals in the areas of criminology, sociology, surveillance studies, human and social geography, and urban studies and planning.

"Public space is constantly contested. Wherever conflicts escalate, control and order are the foremost responses. This book offers a fresh alternative to this austere approach. A group of endowed scholars from all around the world discuss public urban space, expanding critical social geography into a multidisciplinary view. The book provides a timely critique of contemporary rigid policing and ubiquitous surveillance. It shows how increasing regulation and normalization contribute in increasing social exclusion and polarization. The voices of marginal groups are clearly heard, and the global approach becomes tangible with several everyday examples."

"Ranging around the globe and across academic disciplines, Order and Conflict in Public Space delves into the dangerous dialectic by which urban public space is made and remade. As the book’s provocative case studies point out, forces of privatization, surveillance and exclusion now pervade contemporary public space to the point that its very viability seems increasingly uncertain. At the same time, the sort of sharp, engaged analysis found in these pages offers hope of something better than an obituary."

Section I: Spaces of control

3. Securitization and urban space: a study from a skyscraper in Mexico City (Nelson Arteaga Botello)

4. The residential normalization of public spaces. Towards a post-punitive regulation?" (Antonin Margier)

Epilogue: Chaos/order and the future of public space research

11. The future of (spatial) criminology and research about public space (Keith Hayward)

12. Diss & Ditch. What to do with public space? (Myriam Houssay-Holzschuch)

Lucas Melgaço is a researcher and lecturer at the Department of Criminology, Vrije Universiteit Brussel, Belgium.

Francesca Menichelli is a researcher at the Centre for Research in the Arts, Social Sciences and Humanities based at the University of Cambridge, UK.