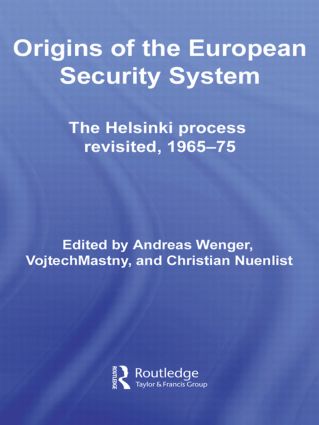 Origins of the European Security System

This edited volume explores the significance of the early ‘Helsinki process’ as a means of redefining and broadening the concept of security during the latter half of the Cold War.

The early Helsinki process introduced innovative confidence-building measures, and made human rights a requirement of a legitimate and well-functioning international system, thus providing the framework for disarmament in Europe in the mid-1980s, as well as the inspiration for the later demise of Communism in Europe. Using newly declassified archives, the book explores the positions of the two superpowers and the crucial impact of European Community member states, which introduced European values into the Cold War debate on security. It also shows how Eastern and Central European nations, such as Poland, did not restrict themselves to providing support to Moscow but, rather, pursued interests of their own. The volume sheds light on the complementary role of the neutrals as mediators and special negotiators in the multilateral negotiations; on the interdependence of politics and economics; and on the link between military security and the CSCE process.

Part 1: Introduction 1. New Perspectives on the Origins of the CSCE Process Andreas Wenger and Vojtech Mastny Part 2: The Superpowers and European Détente 2. North America, Atlanticism, and the Making of the Helsinki Final Act Michael Cotey Morgan 3. Henry Kissinger and the Reconceptualization of European Security, 1969–75 Jeremi Suri 4. The USSR and the Helsinki Process, 1969–75: Optimism, Doubt, or Defiance? Marie-Pierre Rey Part 3: Eastern Strategies in the CSCE 5. The Warsaw Pact and the European Security Conference, 1964–69: Sovereignty, Hegemony, and the German Question Douglas Selvage 6. The GDR’s Targets in the Early CSCE Process: Another Missed Opportunity to Freeze the Division of Germany, 1969–73 Federica Caciagli 7. ‘Europe Must Not Become Greater Finland’: Opponents of the CSCE: The German CDU/CSU and China Bernd Schaefer Part 4: Western Strategies in the CSCE 8. The EC-Nine, the CSCE, and the Changing Pattern of European Security Daniel Möckli 9. From Linkage to Freer Movement: The Federal Republic of Germany and the Nexus between Western CSCE Preparations and Deutschlandpolitik, 1969–72 Petri Hakkarainen 10. ‘It Was Cold War and We Wanted to Win’: Human Rights, ‘Détente’, and the CSCE Floribert Baudet Part 5: The Neutrals – Economics – Military Security 11. Expanding the East-West Dialogue beyond the Bloc Division: The Neutrals as Negotiators and Mediators, 1969–75 Christian Nuenlist 12. Helsinki and Rambouillet: US Attitudes towards Trade and Security during the Early CSCE Process, 1972–75 Duccio Basosi 13. The Link between CSCE and MBFR: Two Sprouts from One Bulb Helga Haftendorn

Andreas Wenger is professor of international security policy and director of the Center for Security Studies at ETH Zurich (Swiss Federal Institute of Technology Zurich).

Vojtech Mastny is project coordinator of the Parallel History Project on Cooperative Security, based in Zurich.

Christian Nuenlist is a foreign desk editor at the Swiss daily Mittelland Zeitung. He received his PhD from the University of Zurich in 2005.

The CSS Studies in Security and International Relations examines historical and contemporary aspects of security and conflict. The series provides a forum for new research based upon an expanded conception of security and will include monographs by the Center's research staff and associated academic partners.