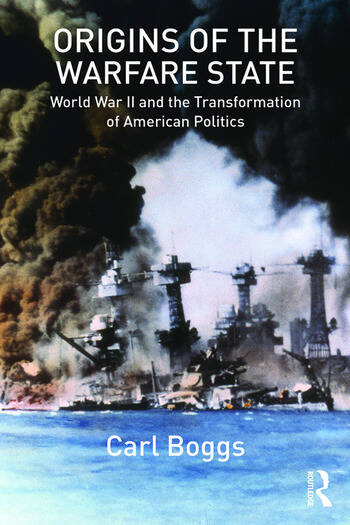 Origins of the Warfare State: World War II and the Transformation of American Politics

The post-World War II emergence of a full-blown state of perpetual war is arguably the most important feature of contemporary American politics. This book examines the "warfare state" in terms of a broad ensemble of structures, policies, and ideologies: permanent war economy, national security-state, global expansion of military bases, merger of state, corporate, and military power, an imperial presidency, the nuclear establishment, and superpower ambitions. Carl Boggs makes the argument that the "Good War" led to an authoritarian system that has expanded throughout the post-war decades, undermining liberal-democratic institutions and values in the process. He goes on to suggest that current American electoral politics show no sign of rolling back the warfare state and in fact, may push it to a new threshold bordering on American fascism.

CHAPTER 1: FROM PEARL HARBOR TO THE "ASIAN PIVOT"

CHAPTER 4: THE CURSE OF BOMB POWER

CHAPTER 6: THE ROAD TO GLOBAL DISASTER?

Carl Boggs is Professor of Social Sciences at National University in Los Angeles and author or editor of numerous books. He is recipient of the Charles McCoy Career Achievement Award from the American Political Science Association.

Insightfully linking current structures, policies, and ideology with the historical conditions that gave rise to the US as a global hegemon, Carl Boggs brilliantly exposes the emergence of a permanent "warfare state" and provides the reader with an essential understanding of the developments of the national security state and the imperial presidency since WWII.

While Hollywood continues to romanticize World War II as a "good war," Carl Boggs portrays the war for what it was: a massive industrial onslaught of death and destruction that consolidated a permanent American warfare state. . . .Dispassionately exploding myth after myth of the ascendant national security state, Boggs’ critical perspective also contains a moment of hope that we might yet escape imprisonment by the military-industrial complex.

If you believe that democracy matters, read this book. Carl Boggs has written the most detailed, convincing, and insightful book yet to appear on the origins and spread of the warfare state.

Origins of the Warfare State

pries open a subject that has been nailed shut for far too long – the ongoing bad effects of the "good war." This book should be a catalyst to explore the realities of how the US and the rest of the world continue to suffer from dire consequences set in motion by the World War that ended more than seventy years ago.

Norman Solomon, Author of War Made Easy: How Presidents and Pundits Keep Spinning Us to Death

In a world where the ruling classes and bourgeoisie are engaging in new forms of economic banditry and outlawry, creating a strategic template that inevitably leads to military intervention, financial parasitism, mafia globalism, and fascism, Origins of the Warfare State serves as a clarion call to action.

Carl Boggs shows us how the "good war" created global domination and massive destruction, taking millions of lives while propagandizing events everywhere. Historically informed, clearly written, and hard-punching, this is Boggs at his very best.

, Author of Profit Pathology and Other Indecencies