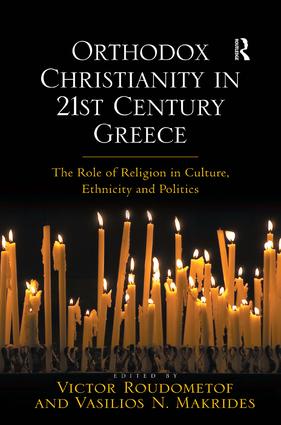 The Role of Religion in Culture, Ethnicity and Politics, 1st Edition

One of the predominantly Orthodox countries that has never experienced communism is Greece, a country uniquely situated to offer insights about contemporary trends and developments in Orthodox Christianity. This volume offers a comprehensive treatment of the role Orthodox Christianity plays at the dawn of the twenty-first century Greece from social scientific and cultural-historical perspectives. This book breaks new ground by examining in depth the multifaceted changes that took place in the relationship between Orthodox Christianity and politics, ethnicity, gender, and popular culture. Its intention is two-fold: on the one hand, it aims at revisiting some earlier stereotypes, widespread both in academic and others circles, about the Greek Orthodox Church, its cultural specificity and its social presence, such as its alleged intrinsic non-pluralistic attitude toward non-Orthodox Others. On the other hand, it attempts to show how this fairly traditional religious system underwent significant changes in recent years affecting its public role and image, particularly as it became more and more exposed to the challenges of globalization and multiculturalism.

'This is a deep, masterly and penetrating exploration of Orthodox Christianity in contemporary Greece. Intellectually powerful and methodologically rigorous, the chapters converge in a general cohesion of the cultural themes of the volume which bear directly on the public role of religion in Greek society and beyond. The result is an invaluable contribution to the study of a specific and rather under-researched area of contemporary European religious culture.' Nikos Kokosalakis, University of Liverpool, UK 'I welcome this new book that gives more information about the dynamics of Orthodox Church. The authors involved in this initiative are at the top level in the scientific community. I think that the book will be a point of reference for all sociologists of religion, presenting a better knowledge of the relationship between State and State Religion in the Orthodox context.' Roberto Cipriani, University of Rome, formerly President of the Research Committee for Sociology of Religion in the International Sociological Association '[This book] will prove to be a useful tool for any reader wanting to understand Greek Orthodoxy beyond cliches.' Religion Watch '[This book] is a much needed contextualisation of some current issues in the Greek (and Orthodox) situation. It also effectively dismantles the customary non-Orthodox presupposition of a monolithic, backward-looking Orthodox Church.' Journal of Contemporary Religion '… this volume is a very useful and fruitful one, which casts new light on the issue of Orthodoxy in Greek society, a light that is neither theological and ecclesiastical nor exclusively historical. The volume is of potential interest for researchers and scholars who are interested in knowing about the social and political role of Orthodoxy in contemporary Greece. It is an objective and scientific contribution free of overtly ideological and biased argumentation, and could lead to fertile further research in the near future. Furthermore, it offer