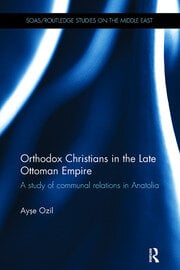 Orthodox Christians in the Late Ottoman Empire: A Study of Communal Relations in Anatolia

Orthodox Christians, as well as other non-Muslims of the Ottoman Empire, have long been treated as insular and homogenous entities, distinctly different and separate from the rest of the Ottoman world. Despite this view prevailing in mainstream historiography, some scholars have suggested recently that non-Muslim life was not as monolithic and rigid as is often supposed.

In an endeavour to understand the ties among Christians within the administrative, social and economic structures of the imperial and Orthodox Christian worlds, Ayşe Ozil engages in a rarely undertaken comparative analysis of Ottoman, Greek and European archival sources. Using the hitherto under-explored region of Hüdavendigar in the heartland of the empire as a case study, she questions commonplace assumptions about the meaning of ethno-religious community within a Middle Eastern imperial framework.

Offering a more nuanced investigation of Ottoman Christians by connecting Ottoman and Greek history, which are often treated in isolation from one another, this work sheds new light on communal existence.

Ayşe Ozil is currently a post-doctoral fellow at the Center for Hellenic Studies, Princeton University. Her research interests include Greek Orthodox and other ethno-religious communities in the Ottoman Empire, the history of Istanbul, travel-writing in the Balkans and the Middle East.

Ayşe Ozil’s Orthodox Christians in the Late Ottoman Empire is a superb contribution to […] newer historiographic trends and is squarely within both. In focusing on the Greek Orthodox Christians of Hüdavengidar in Anatolia, Ozil’s study endeavors to show the ways in which Orthodox Christian identity did—and did not—shape the social and economic worlds in which Orthodox Christians functioned. As such, this monograph furthers the very welcome move away from communalist (or exclusively communalist) approaches to the social history of the Ottoman Empire. Far less has been written about the Greek Orthodox Christians of the Ottoman Empire in their social, political and economic contexts, and this book takes us very solidly in that important new direction, teasing apart the complicated administrative, economic, legal, and "national" frameworks within which they functioned. […] The book’s two main pivots—the sketching out of the multiple organizational frames within which Orthodox Christians operated and close attention to the factors that conditioned them—render this a very well organized, consistent, and valuable study. It gives truly sustained attention to the questions that it sets out to answer, and the reader comes away feeling satisfyingly well informed, indeed, feeling very clearly to have learned much of substance from reading the book. […] Orthodox Christians in the Late Ottoman Empire is an excellent addition to our understanding of a very important period and subject in Ottoman and Greek history, and it deserves to be widely read in the field and beyond.

Ozil’s Orthodox Christians in the late Ottoman Empire provides an interesting perspective regarding communal life of Christian Orthodox or Greek communities in the Ottoman empire, using the communities of the South Marmara coast as a case in point. Against a Greek historiographical

background which posits these communities as coherent and separate from other religious communities, Ozil provides a much more complicated picture which questions well-defined boundaries. Local administration, finance and taxation, law and the legal corporate status of communal institutions, as well as issues of nationality, are discussed in detail, with the use of both Greek and Ottoman primary sources. […] the study provides a fresh perspective by advancing one step further recent approaches that have questioned the coherence and homogeneity of Ottoman Christian "communities", underlined existing cultural and social differences and stressed the policies of Hellenisation in producing a solid national body. […] Ozil does not suggest that the process of nationalising Ottoman Christians was absent or unsuccessful but that this framework ran against the consolidation of communal institutions at a local level. The South Marmara case provides a different and useful perspective to rethink the limits of community building within the parameters of the Ottoman legal and political landscape.

Haris Exertzoglou, University of the Aegean