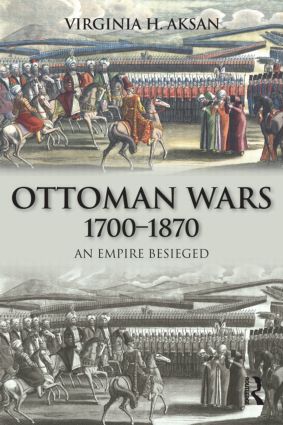 The Ottoman Empire had reached the peak of its power, presenting a very real threat to Western Christendom when in 1683 it suffered its first major defeat, at the Siege of Vienna. Tracing the empire’s conflicts of the next two centuries, The Ottoman Wars: An Empire Besieged examines the social transformation of the Ottoman military system in an era of global imperialism

Featuring illustrations and maps, many of which have never been published before, The Ottoman Wars draws on previously untapped source material to provide an original and compelling account of an empire near financial and societal collapse, and the successes and failures of a military system under siege. The book is a fascinating study of the decline of an international power, raising questions about the influence of culture on warfare.

1. The Political Map of Eastern Europe circa 1700

3. From Prut to Belgrade:Illusions of Success & Failure

5. Selim III and the New Order

6. The Internal and External Challenges to Selim III

7. Mahmud II and the New Absolutism

8. The Auspicious Occasion and its Consequences

9. An Empire Returns to War

10. From Tanzimat to Crimean War

is Associate Professor in the Department of History at McMaster University, Ontario, Canada. She has written for numerous journals and is the author of An Ottoman Statesman in War and Peace: Ahmed Resmi Efendi, 1700-1783 (1995).