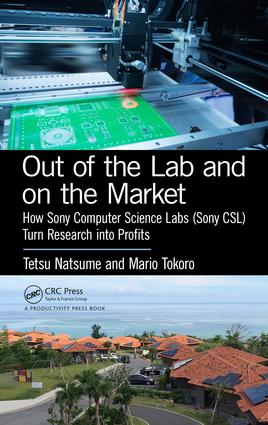 Out of the Lab and On the Market

Tetsu Natsume of Sony Computer Science Labs (Sony CSL) has been pioneering technology promotion for a decade. As he seeks marketplace opportunities for ground-breaking research, he plays the role of a Technology Producer -- a role that will be increasingly important as organizations seek optimally efficient and effective applications of basic research.

Natsume's task has been greatly facilitated by his association with Sony CSL, a research lab founded by co-author Mario Tokoro. While CSL is owned by SONY, it nevertheless operates almost entirely independently. At CSL, a diverse, cosmopolitan group of talented researchers are free to explore any idea that might one day change the world. Natsume's task is to optimise that process by identifying the best path to the market for the new insights that pour out of CSL.

Functioning somewhat like a movie producer, Natsume has blazed a trail for technology promoters the world over. He explains his techniques for overcoming challenges and embracing opportunities. His "10 core principles of technology promotion", which offer the reader an especially valuable framework for moving between the very different worlds of the lab and the marketplace, cover the importance of appropriate timing, speed, commitment and mindset, while being rigorously simple and boldly ambitious.

This book is an eye-opening primer for anyone interested in realising and optimising the commercial value of basic research.

Head of Technology Promotion Office of Sony CSL and responsible for business incubation of research projects.

Sony CSL was founded in February 1988. Each Sony CSL researcher sets an ambitious goal and approaches it systematically using Open Systems Science, publishing his or her findings along the way. We believe that the best results are produced by individuals acting independently, or as members of an ad hoc team, and that a laboratory should offer the best possible conditions to support such activities. At Sony CSL, value is assessed by the degree to which achievements are perceived to contribute to humanity and society, to new science and technology, to industrial progress, and to product development… Our aim is to become a laboratory whose reputation and myriad achievements long stand the test of time.