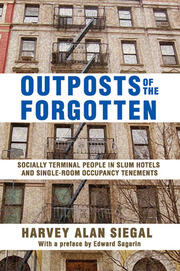 The single-room occupancy (SRO) tenements and welfare hotels located throughout New York City, but concentrated on the Upper West Side of Manhattan, provided housing for many of society's troubled, marginal members in the late 1970s, when this book was originally published. The predominant population of these buildings was old, non-white, unemployed, disabled, and in poor health. What distinguished this community, however, was not that it is was part of a ghetto or slum, but that it was composed of poor people living amidst affluence, combining elements of both the law-abiding and criminal worlds.

Institutionally, the SRO tenement world described in this book is seen as a half-way area between open society and the total institution. Without the support and control available in the SROs, confinement in a total institution would be a certainty for many of the residents. This book, a participant-observer journal as well as an ethnographic study, suggests an alternative to institutionalization.

As Edward Sagarin notes in his preface, Siegal does not lack compassion for the sufferings of the people, but the focus is on the descriptions of their lives. Outposts of the Forgotten documents the circumstances of some of New York's forgotten residents.