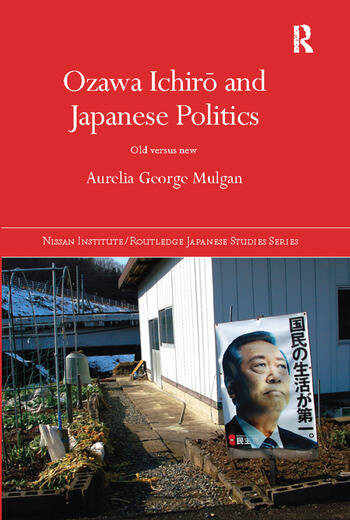 Ozawa Ichirō was the axis on which Japanese politics turned for more than two decades. He helped to reshape the electoral system, political funding rules, the evolution of the party system, the nature of executive government, the roles and powers of bureaucrats, and the conduct of parliamentary and policymaking processes. Admired and reviled in almost equal measure, Ozawa has been the most debated and yet least understood politician in Japan, with little agreement to be found amongst the many who have debated his patent political assets and palpable political flaws.

This book examines the political goals, behaviour, methods and practices of Ozawa Ichirō, and in doing so, provides fascinating insights into the inner workings of Japanese politics. It explores Ozawa’s paradoxical and conflicting contributions in terms of two contrasting models of ‘old’ and ‘new’ politics. Indeed, therein lies the problem of understanding the ‘real’ Ozawa: he remained a practitioner of old politics despite his rhetorical agenda of change to bring about new politics. In seeking to unravel the Ozawa enigma, Aurelia George Mulgan reveals his primary motivations, to establish whether he sought power primarily to enact reforms, or, whether his reform goals simply disguised power-seeking objectives. This volume seeks to illuminate Ozawa’s true character as a politician, and untangle the complex elements of old and new politics that he represents.

Aurelia George Mulgan is Professor in the School of Humanities and Social Sciences at the University of New South Wales, Australia