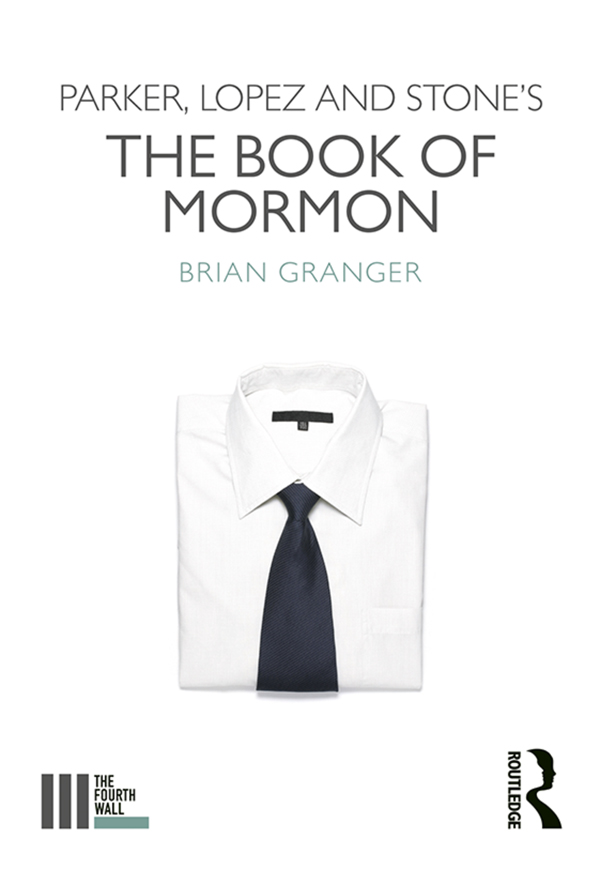 Parker, Lopez and Stone's The Book of Mormon

In 2011, a musical full of curse words and Mormon missionaries swept that year’s Tony Awards and was praised as a triumphant return of the American musical. This book explores the inherent achievements (and failures) of The Book of Mormon—one of the most ambitious, and problematic, musicals to achieve widespread success. The creative team members—Matt Parker, Trey Stoneand composer Robert Lopez—were collectively known for their aggressive use of taboo subjects and crude, punchy humor. Using the metaphor of boxing, Granger explores the metaphorical punches the trio delivers and ruminates over the less-discussed ideological wounds that their style of shock absurdism might leave behind.

This careful examination of where The Book of Mormon succeeds and fails is sure to challenge discussion of our understanding of musical comedy and our appreciation for this cultural landmark in theatre.

Preface: The Biggest Man-Balls on Broadway

1. Tradition versus Originality: Musical Theatre’s Titleholder and Its Number One Challenger (A Win)

2. The Fight America Wanted: Faith as Creative Self-Guidance Versus Faith as Dutiful Collective Obedience (A Win)

is Assistant Professor of Theatre at Mary Baldwin University in Staunton, Virginia, and is a songwriter, playwright and alumnus of NYU’s Graduate Musical Theatre Writing Program. His works for the stage include Rebel Moon and Dierdre: An a cappella Rock Opera.

Routledge’s Fourth Wall books are short, accessible accounts of some of modern theatre’s best loved works. They take a subjective but easily digestible approach to their topics, allowing their authors the opportunity to explore their chosen subject in a way that is absorbing enough to be of use both to lovers of theatre and those who are being asked to study a play more deeply.

Each book in the series looks at a specific play, variously exploring its themes, contexts and characteristics while prioritising original, insightful writing over complexity or scholarly weight. While other cultural products such as albums and films are well served by this kind of writing, the Fourth Wall series aims to find room between rigorous analysis and the short format of reviews or articles. They are extended accounts that get to the heart of their chosen works without being bound by the density that academic treatments can often require.