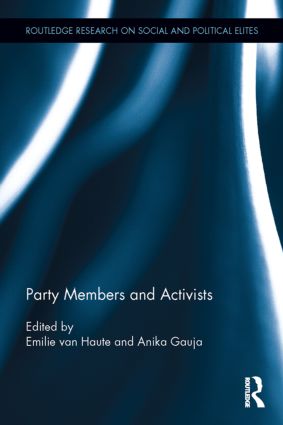 Membership of political parties is diverse. Not everyone participates and those who do, do not participate in the same way.

This book engages with the debate over the significance and future of political parties as membership organisations and presents the first broad comparative analysis of party membership and activism. It is based on membership surveys which have been administered, gathered and collated by a group of prominent party scholars from across Europe, Canada and Israel. Utilizing this rich data source together with the insights of party scholars, the book investigates what party membership means in advanced industrial democracies. In doing so, it provides a clearer picture of who joins political parties, why they do it, the character of their political activism, how they engage with their parties, and what opinions they hold.

This text will be of interest to scholars and students of comparative politics, particularly to those interested in representation, participation, political parties and elections.

is Senior Lecturer in the Department of Government and International Relations, University of Sydney, Australia.

All political systems are governed by ruling elites – presidents, prime ministers, ministers, civil servants, judges, mayors and councillors all play important roles in running our lives, while beyond the state people are picked to run international organizations. Social elites, such as global business or media tycoons, religious or ethnic leaders, play a major role influencing public policy. The books in this series examine all such political and social elites within local, national and international arenas. We are interested in theoretical and empirical analyses of elites. Whilst elites have been studied in the past, modern computing and electronic data-collection facilities mean that for the first time comprehensive information on the personal characteristics of elites, including factors such as birthplace, age, and social and educational background, can relatively easily be gathered. We can explore the ways in which people enter the elite, the networks they form and the policies they effect. Modern techniques open up exciting opportunities to examine our governors, their actions and interactions in more detail than ever before.