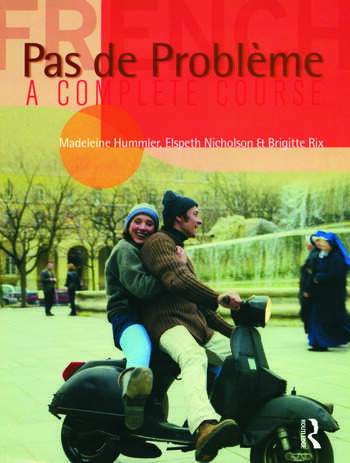 Pas de problème is a highly illustrative and communicative course designed for adults of all ages, from those with a 'rusty' recollection of school French to those advancing in the acquisition of a new language on a fast track. It will give students a thorough grounding in all the skills required to understand, speak, read and write contemporary French.

The coursebook consists of 12 lively, illustrated chapters covering different broad themes and providing plenty of diverse material from technical to light-hearted. A wide range of registers is covered, from everyday idioms to formal letter-writing phrases.

Each chapter contains the following:

* explanations of new grammar in one single block for easy reference

Audio files to accompany this book are available free of charge at www.routledge.com/cw/hummler

Chapter 1. Getting to know France. Describing people, places, work and study. Asking questions and saying no. Listening and extracting relevant infomation.
Chapter 2. Dealing with health issues. Talking about your daily life. Saying how long, when and where.
Chapter 3. Understanding and explaining procedures. Following and describing recipes and experiments.
Chapter 4. Expressing the past (1). Living and working abroad. Practical life and everyday situations.
Chapter 5. Word games. Charades. Cards and chess. General quiz. Quiz on France. Jokes.
Chapter 6. Describing events in the past (2). Reporting on events. Life stories, biographies and histories. The cinema.
Chapter 7. Technology and science. Describing how things were or used to be. Making suggestions. Saying how something was done.
Chapter 8. Describing accidents and incidents in the past (3). Asking for, and giving information. Writing summaries and reports. Road safety.
Chapter 9. Describing events in the past (4). Defending a position. Dealing with officials.
Chapter 10. Personal and work relationships. Becoming familiar with idiomatic expressions. Games.
Chapter 11. The French way of life and French customs. Describing what will happen. Talking about future plans, dreams and inventions.
Chapter 12. Discussing the environment. Writing formal letters. Making hypotheses.

Madeleine Hummler, Brigitte Rix and Elspeth Nicholson lecture in French on the Languages for All Programme, University of York, UK