Passion and Control: Dutch Architectural Culture of the Eighteenth Century 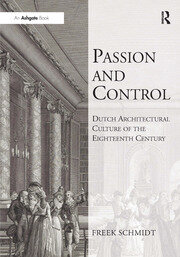 Passion and Control: Dutch Architectural Culture of the Eighteenth Century

Passion and Control explores Dutch architectural culture of the eighteenth century, revealing the central importance of architecture to society in this period and redefining long-established paradigms of early modern architectural history. Architecture was a passion for many of the men and women in this book; wealthy patrons, burgomasters, princes and scientists were all in turn infected with architectural mania. It was a passion shared with artists, architects and builders, and a vast cast of Dutch society who contributed to a complex web of architectural discourse and who influenced building practice. The author presents a rich tapestry of sources to reconstruct the cultural context and meaning of these buildings as they were perceived by contemporaries, including representations in texts, drawings and prints, and builds on recent research by cultural historians on consumerism, material culture and luxury, print culture and the public sphere, and the history of ideas and mentalities.

'There are many new ideas here, and the notes are full of references to primary sources. Altogether, this makes excellent reading for scholars and students in a number of fields. Many of those with deep knowledge of the more familiar aspects of Netherlandish art history will enjoy a chronological expansion of their knowledge. And many with expertise in eighteenth-century art and architecture will be able to fill out the geographical scope of their knowledge. On both of these fronts, Schmidt has done much to counter this overlooked material.'

'Dutch society in the eighteenth century was characterized by a combination of financial, economic and intellectual innovation, but still suffers from an unmerited reputation of stagnation. Studies of its architecture are rare, but among the few recent book-length treatments of this neglected period, this book by Freek Schmidt stands out, because he is the first to offer an integrated view of buildings, architects, their education and public debate about architecture within a quickly changing and globalizing world.'

'Schmidt is a keen observer of the continually shifting terrain of the complex - and now largely lost - world of eighteenth-century Dutch architectural culture. Like the country itself, always shifting topographically, architecture in the period before the Napoleonic invasion centralized a federation of provincial and municipal sovereign entities was in a state of transition. Architects as such had yet to emerge professionally; and, as Schmidt shows, patrons, be they the Stadholders William IV and V or a growing middle class, shaped the appearance of Amsterdam, The Hague, and the countryside in collaboration with building trades. This is an exemplary study which relocates the very frame for understanding Dutch architectural culture between the seventeenth-century Golden Age and the national consolidation of the nineteenth century from accounts of style to a complex net of positions, postures, and discourse in the emerging cultures of print and in such original learned institutions as those rare survivors of the period, the Felix Meritis building in Amsterdam and the intriguing Teylers Museum in Haarlem, still one of the masterpieces of Dutch architecture.'