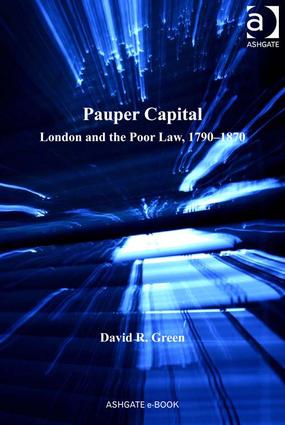 Few measures, if any, could claim to have had a greater impact on British society than the poor law. As a comprehensive system of relieving those in need, the poor law provided relief for a significant proportion of the population but influenced the behaviour of a much larger group that lived at or near the margins of poverty. It touched the lives of countless numbers of individuals not only as paupers but also as ratepayers, guardians, officials and magistrates. This system underwent significant change in the nineteenth century with the shift from the old to the new poor law. The extent to which changes in policy anticipated new legislation is a key question and is here examined in the context of London. Rapid population growth and turnover, the lack of personal knowledge between rich and poor, and the close proximity of numerous autonomous poor law authorities created a distinctly metropolitan context for the provision of relief. This work provides the first detailed study of the poor law in London during the period leading up to and after the implementation of the Poor Law Amendment Act of 1834. Drawing on a wide range of primary and secondary sources the book focuses explicitly on the ways in which those involved with the poor law - both as providers and recipients - negotiated the provision of relief. In the context of significant urban change in the late eighteenth and nineteenth century, it analyses the poor law as a system of institutions and explores the material and political processes that shaped relief policies.

Prize: A Choice Outstanding Academic Title for 2010 ’This important contribution […] should be in all major academic libraries. Summing Up: Essential.’ Choice ’[David Green] has produced a careful, nuanced and clear account that sets out a number of new lines of enquiry for those working on poverty and the history of London more generally. Even in this busy and high-quality field of research, this is something of a guiding light, which others will find vital for contextualizing their studies.’ London Journal ’Pauper Capital is an excellent introduction to the changing administration of poor relief in London from the 1790s to 1870. It should be read by anyone interested in understanding the regional differences in relief administration and spending in nineteenth century England.’ EH.NET Book Review 'Poor law historians, who have long recognized the need for a comprehensive study of the administration of poor relief in London, have been put off by the sheer magnitude of the undertaking. Now this long-felt need has been abundantly satisfied by David R. Green's superb study.' Law and History Review 'Pauper Capital is undoubtedly a major contribution to urban and welfare history in the modern period.' Economic History Review 'This is a book that needed to be written, and one that undoubtedly took an enormous commitment to write… Given the scale of the task, then, David Green is to be congratulated without reservation on having produced a seminal work on the poor law in London during what was arguably the most complex, but also the most crucial, period in its history.' Local Population Studies 'This is a story that certainly needed telling, and Green makes an important contribution to the history of the Poor Law in doing so.' Journal of British Studies '… the book succeeds in pulling together a story that was previously difficult and fragmentary, in an elegant and well-presented account.' Enterprise & Society ’Here we have an exemplary piec