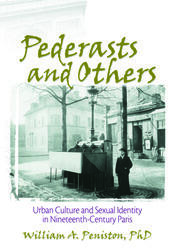 Pederasts and Others: Urban Culture and Sexual Identity in Nineteenth-Century Paris

Examine how a community of support in Nineteenth-Century Paris became a blueprint for modern sexual identity!

A unique social history, Pederasts and Others: Urban Culture and Sexual Identity in Nineteenth-Century Paris is a valuable addition to the growing field of gay and lesbian studies. The book examines the interaction between the city's male homosexual subculture and Parisian authority figures who attempted to maintain political and social order during the early years of the French Third Republic by using laws against public indecency and sexual assault to treat same-sex sexuality as a crime. Faced with a constant cycle of surveillance, harassment, and arrest, the city's gay men survived the hostile urban environment by forming a community of support that had a widespread and lasting influence on the development of modern sexual identities.

Pederasts and Others: Urban Culture and Sexual Identity in Nineteenth-Century Paris is based on a statistical analysis of more than 800 working-class and middle-class men who were arrested or investigated by Parisian police between 1873 and 1879. Their stories, presented through long and short case studies, represent nearly 2,000 names recorded by police in “Pederasts and Others,” a ledger detailing the arrests of male homosexuals for public offenses against decency and other minor offenses. (The term “pederast” identified those suspected of same-sex sexual activity, not the modern definition that indicates homosexual relations with a minor.) The ledger entries reveal specific habits, attitudes, values, and characteristics about these men that set them apart—the same traits that identified them as part of a community based on their behavior and relationships.

Pederasts and Others: Urban Culture and Sexual Identity in Nineteenth-Century Paris examines:

and takes an expanded look at three case studies: Pederasts and Others: Urban Culture and Sexual Identity in Nineteenth-Century Paris also includes tables, appendices, and maps linked to statistical data. The book is an essential resource for historians, sociologists, sexologists, criminologists, and other scholars working in the fields of gay and lesbian studies, urban studies, social and cultural history, and French history.