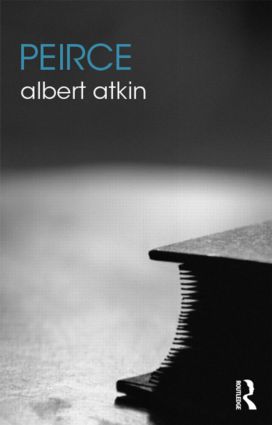 Charles Sanders Peirce (1839-1914) is generally regarded as the founder of pragmatism, and one of the greatest ever American philosophers. Peirce is also widely known for his work on truth, his foundational work in mathematical logic, and an influential theory of signs, or semiotics. Albert Atkin introduces the full spectrum of Peirce’s thought for those coming to his work for the first time.

The book begins with an overview of Peirce’s life and work, considering his early and long-standing interest in logic and science, and highlighting important views on the structure of philosophical thought. Atkin then explains Peirce’s accounts of pragmatism and truth examining important later developments to these theories. He then introduces Peirce’s full accounts of semiotics, examines his foundational work on formal and graphical logic, and introduces Peirce’s account of metaphysics, the least understood aspect of his philosophy. The final chapter considers Peirce’s legacy and influence on the thought of philosophers such as John Dewey and Richard Rorty, as well as highlighting areas where Peirce’s ideas could still provide important insights for contemporary philosophers.

Including chapter summaries, suggestions for further reading and a glossary, this invaluable introduction and guide to Peirce’s philosophy is essential reading for those new to his work.

"Albert Atkin has given us a substantial, accurate, and sophisticated guide to Peirce's complex philosophy. Everyone interested in the history of American philosophy is in his debt." - Cheryl Misak, University of Toronto, Canada

"In this admirably clear, painstakingly accurate, and philosophically responsible portrait of an undeniable but enigmatic genius, Albert Atkin displays the contemporary relevance of Peirce's thought to debates regarding science, rationality, objectivity and a host of other important topics. Those trained in Anglophone philosophy cannot do better than this impressive contribution to a valuable series of guidebooks to pivotal figures in Western thought." - Vincent Colapietro, Pennsylvania State University, USA

"One might have thought it impossible to convey both the breadth and depth of Peirce’s wildly inventive research in a clear and accessible way, but Atkin gives us an incredibly lucid and well-organized path through the maze. This engaging book will stand as a remarkable achievement." - Alexander Klein, California State University - Long Beach, USA

Albert Atkin is a senior lecturer in the Department of Philosophy, Macquarie University, Australia. He is the author of The Philosophy of Race (Routledge, 2012).

is a major series of introductions to the great Western philosophers. Each book places a major philosopher or thinker in historical context, explains and assesses their key arguments, and considers their legacy. Additional features include a chronology of major dates and events, chapter summaries, annotated suggestions for further reading and a glossary of technical terms.

An ideal starting point for those new to philosophy, they are also essential reading for those interested in the subject at any level.