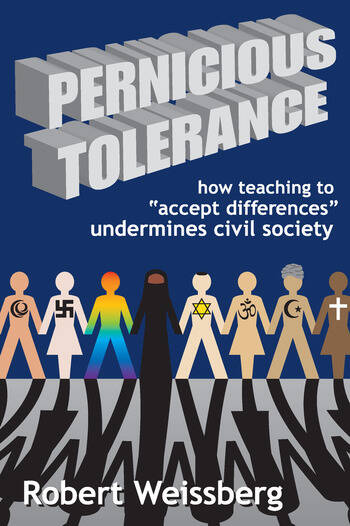 Recent decades have seen a consistent effort by the American educational establishment to instruct schoolchildren about the importance of "appreciating differences," all in the name of "tolerance," so as to quell burgeoning "hate." In Pernicious Tolerance, Robert Weissberg argues that educators' endless obsession with homophobia, sexism, racism, and other alleged hateful disorders is part of a much larger ongoing radical ideological quest to transform America, by first capturing education.

In pursuing their objectives, radical pedagogues have abandoned the idea of tolerance of what some find objectionable. In its place they have adopted a fantasy—that tolerance can be replaced with a blank-check appreciation of diversity. Weissberg argues that this approach is guaranteed to promote civil strife. In rejecting a more workable version of tolerance, today's professional educators risk civic disaster in an effort to achieve legitimacy for those they believe are unfairly marginalized, stigmatized, underappreciated, and otherwise disdained.

Weissberg also addresses the issue of an ever-expanding welfare state not only concerned with our material being, but, critically, also with our "mental health," defined as beliefs about the vulnerable or victims in waiting—women, ethnic and racial minorities, homosexuals, and others. He shows that this therapeutic state does not stop at imploring good thinking; it goes much further and criminalizes evil thoughts, as if thinking poorly of those at risk is tantamount to inflicting bodily harm. There is substantial collateral damage in this quest for tolerance; it facilitates intellectual sloth while raising anti-intellectualism to an honored professional norm.