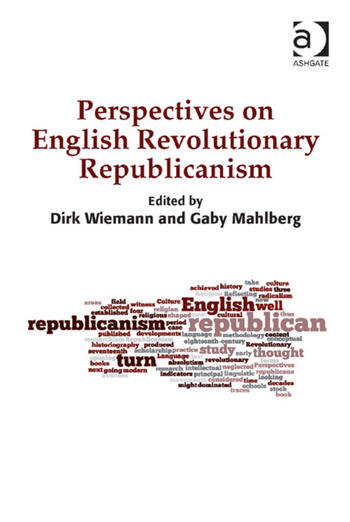 Perspectives on English Revolutionary Republicanism takes stock of developments in the scholarship of seventeenth-century English republicanism by looking at the movements and schools of thought that have shaped the field over the decades: the linguistic turn, the cultural turn and the religious turn. While scholars of seventeenth-century republicanism share their enthusiasm for their field, they have approached their subject in diverse ways. The contributors to the present volume have taken the opportunity to bring these approaches together in a number of case studies covering republican language, republican literary and political culture, and republican religion, to paint a lively picture of the state of the art in republican scholarship. The volume begins with three chapters influenced by the theory and methodology of the linguistic turn, before moving on to address cultural history approaches to English republicanism, including both literary culture and (practical) political culture. The final section of the volume looks at how religion intersected with ideas of republican thought. Taken together the essays demonstrate the vitality and diversity of what was once regarded as a narrow topic of political research.

Dirk Wiemann is Professor of English Literature at the University of Potsdam, Germany. Along with a keen interest in postcolonial studies, his research focuses on the areas of seventeenth-century English republicanism and radicalism, emotion studies and contemporary representations of the English Civil War. His publications include Genres of Modernity: Contemporary Indian Novels in English (Editions Rodopi B.V., 2008) and a number of articles on aspects of cultural politics in seventeenth-century England. Gaby Mahlberg is Senior Lecturer in Early Modern British History at Northumbria University, UK. She has previously taught at the University of East Anglia, Queen Mary College and Goldsmiths in the UK, and Humboldt University, Berlin and the University of Potsdam in Germany, and is author of Henry Neville and English Republican Culture in the Seventeenth Century: Dreaming of Another Game (Manchester University Press, 2009).

'... the collection effectively demolishes any notion of English insularity regarding the political thinking of the Interregnum, and anybody interested in the lives and adventures of texts rather than human beings will read the book with profit.' Journal for the Study of British Cultures 'Collectively, the essays in this volume highlight the complexity in untangling the threads of English republicanism as it wove its way through two centuries of continental thought, and in doing so very clearly demonstrate the benefits of a collaborative, interdisciplinary approach.' Seventeenth Century 'This volume offers refinements rather than breakthroughs. But the refinements are significant: the level of scholarship is generally high and at times outstanding, as attested by the volume’s comprehensive bibliography.' Renaissance Quarterly