This three-volume set of Pharmaceutical Dosage Forms: Parenteral Medications is an authoritative, comprehensive reference work on the formulation and manufacture of parenteral dosage forms, effectively balancing theoretical considerations with the practical aspects of their development. As such, it is recommended for scientists and engineers in the pharmaceutical industry and academia, and will also serve as an excellent reference and training tool for regulatory scientists and quality assurance professionals.

First published in 1984 (as two volumes) and then last revised in 1993 (when it grew to three volumes), this latest revision will address the plethora of changes in the science and considerable advances in the technology associated with these products and routes of administration. The third edition of this book maintains the features that made the last edition so popular but comprises several brand new chapters, revisions to all other chapters, as well as high quality illustrations.

• A discussion of quality attributes of sterile dosage forms, including particulate matter, endotoxin, and sterility testing.

• A detailed chapter on processing of parenteral drug products (SVPs and LVPs).

• An in-depth chapter on lyophilization.

Sandeep Nema Ph.D. is Executive Director, Pharmaceutical R&D, BioTherapeutics Pharmaceutical Sciences at Pfizer in St. Louis. Since graduating in 1992 with his doctorate, Dr. Nema has been involved with the development of small molecule and protein drugs via parenteral delivery, first at Mallinckrodt Medical and then at Pfizer (Searle, Pharmacia), and has led the formulation of four launched products. He is active in the American Association of Pharmaceutical Scientists (AAPS) and the Parenteral Drug Association (PDA), where he has chaired several meetings and focus groups. Dr. Nema holds an adjunct faculty appointment at the University of Tennessee.

John D. Ludwig Ph.D. is Vice President, Business Strategy, Operations, and Clinical Supply Planning, BioTherapeutics Pharmaceutical Sciences at Pfizer, and Site Director for the company’s St. Louis Laboratories. Dr. Ludwig received a B.S. degree in Pharmacy and Ph.D. degree in Pharmaceutics from the University of Tennessee, Memphis and has held numerous research and development positions at Burroughs Wellcome Co, Searle, Inc., Pharmacia, Inc., and Pfizer. He is active in the American Association of Pharmaceutical Scientists (AAPS) and the Parenteral Drug Association (PDA) Training and Research Institute, where he has contributed to developing professional training courses and has regularly served as an instructor. 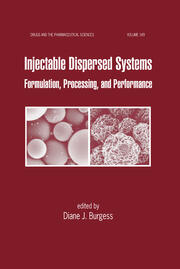