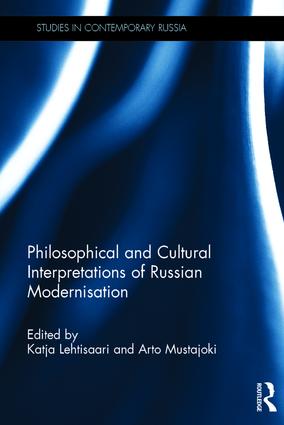 In this book the expert international contributors attempt to answer questions such as: How far is it possible to attribute change in contemporary Russia as due to cultural factors? How does the process of change in cultural institutions reflect the general development of Russia? Are there certain philosophical ideas that explain the Russian interpretation of a modern state?

This edited volume elaborates on processes of Russian modernisation regarding a wide range of factors, including the use of modern technology, elements of civil society, a reliable legal system, high levels of education, equality among citizens, freedom of speech, religion and trade. The main focus is on the Putin era but historical backgrounds are also discussed, adding context. The chapters cover a wide spectrum of research fields from philosophy and political ideas to gender issues, language, the education system, and the position of music as a constituent of modern identity.

Throughout the book the chapters are written so as to introduce experts from other fields to new perspectives on Russian modernisation, and de-modernisation, processes. It will be of great interest to postgraduates and scholars in Philosophy, Politics, IR, Music and Cultural Studies, and, of course, Russian studies.

2. Kant and Russian idealism – a litmus test of modernisation

3. Soviet Modernisation and its Legacies from the Perspective of Civilisational Analysis

4. A Morphology of Russia? The Russian Civilisational Turn and its Cyclical Idea of History

5. The Russian Orthodox Church Today – Transformations Between Secular and Sacred

6. The end of the Russian intelligentsia? Conceptual changes in the context of post-Soviet Russia’s modernisation process.

10. Cultural barriers of the Russian modernization

Katja Lehtisaari is a postdoctoral researcher at the Aleksanteri Institute, University of Helsinki, Finland. She holds a Doctor of Social Sciences degree from University of Tampere and she has published articles and co-authored or edited books on e.g. the development of journalism and the press market structures and media convergence, focusing mainly in Russia and Finland. She is currently also involved in research on the role of media in civic unity and unrest in Central Asia. Lehtisaari is the editor-in-chief of Idäntutkimus, The Finnish Review of East European Studies.

Arto Mustajoki is Professor of Russian language and Dean of the Faculty of Arts in the University of Helsinki, Finland. He has published books and articles in Russian, English and Finnish on functional syntax, corpus linguistics, linguistic theory, miscommunication, Russian mentality, research ethics and science policy. A recent co-edited book was entitled Understanding Russianness (Routledge 2012).

Studies in Contemporary Russia is a series of cutting-edge, contemporary studies. These monographs, joint publications and edited volumes branch out into various disciplines, innovatively combining research methods and theories to approach the core questions of Russian modernisation; how do the dynamics of resources and rules affect the Russian economy and what are the prospects and needs of diversification? What is the impact of the changing state-society relationship? How does the emerging welfare regime work? What is the role of Russia in contemporary international relations? How should we understand the present Russian political system? What is the philosophical background of modernisation as a whole and its Russian version in particular? The variety of opinions on these issues is vast. Some see increasingly less difference between contemporary Russia and the Soviet Union while, at the other extreme, prominent experts regard Russia as a 'more or less' normal European state. At the same time new variants of modernisation are espoused as a result of Russian membership of the global BRIC powers. Combining aspects of Western and Soviet modernisation with some anti-modern or traditional tendencies the Russian case is ideal for probing deeper into the evolving nature of modernisation. Which of the available courses Russia will follow remains an open question, but these trajectories provide the alternatives available for discussion in this ground-breaking and authoritative series. The editor and the editorial board of the series represent the Finnish Centre of Excellence in Russian Studies: Choices of Russian Modernisation.