Philosophy of Law
An Introduction 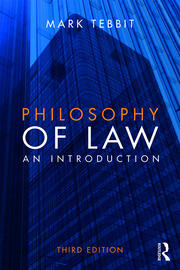 Philosophy of Law: An Introduction

Philosophy of Law: An Introduction provides an ideal starting point for students of philosophy and law. Setting it clearly against the historical background, Mark Tebbit quickly leads readers into the heart of the philosophical questions that dominate philosophy of law today. He provides an exceptionally wide-ranging overview of the contending theories that have sought to resolve these problems. He does so without assuming prior knowledge either of philosophy or law on the part of the reader.

The book is structured in three parts around the key issues and themes in philosophy of law:

This new third edition has been thoroughly updated to include assessments of important developments in philosophy and law in the early years of the twenty-first century. Revisions include a more detailed analysis of natural law, new chapters on common law and the development of positivism, a reassessment of the Austin–Hart dispute in the light of recent criticism of Hart, a new chapter on the natural law–positivist controversy over Nazi law and legality, and new chapters on criminal law, extending the analysis of the dispute over the viability of the defences of necessity and duress.

Part I: What is the law?

Morality and law at variance

2. From common law to modern positivism

The rule of recognition

The problem of Nazi legality

Who were the realists?

The pragmatist attack on certainty

The realist revolt against formalism

Abductive inference to the best explanation

The pragmatics of justice

Dworkin’s theory of law as integrity

The roots of modernity and the Enlightenment

Critics of the Enlightenment: Marx and Nietzsche

The postmodernist attack on modernity: Foucault and Derrida

The contradictions in liberalism

Part II: The reach of the law

H.D.Thoreau: Conscience as the sole basis for obligation

Rawls: the original position and the conditional duty to obey

Rights versus utility – Bentham and Mill

Liberalisation and the Wolfenden Report

Devlin’s critique of the Wolfenden Report

The liberal concept of the individual

The contextualisation of universal rights

Feminist jurisprudence and the rights of women

Rights in relation to class, sex and race

13 Unlawful killing: the defences of necessity and duress

The defence of duress

Murder and the Hale authority

The defence of necessity

Arguments for and against necessity as a defence to murder

Should the Hale authority allow any exceptions?

A veil of ignorance test

The case of Daniel M’Naghten

The M’Naghten Rules and their critics

Diminished responsibility and the 1957 Homicide Act

The problem of justification

Punishment justified by its effects

Criticisms of the traditional theories

Punishment as communication: Nozick and Hampton

Desert and deterrence in sentencing

16 Radical perspectives on crime and punishment

Enlightenment liberalism and its critics

The range of radical criticisms

The individual and society

Conclusion: Enlightenment values and the rule of law

"With its uniquely detailed focus on the Common Law, this is the best textbook available for philosophy students not already familiar with law as it is practiced in the UK, US, and related systems. It will likewise be particularly valuable to law students interested in philosophising about the actual concrete legal systems which surround our lives, rather than "the law" as some abstract and contextless ideal object." Shane Glackin, University of Exeter, UK