Philosophy of Science
The Historical Background 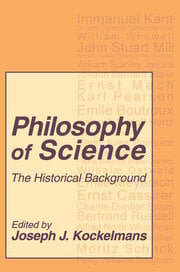 Philosophy of Science: The Historical Background

This anthology of selections from the works of noted philosophers affords the student an immediate contact with the unique historical background of the philosophy of science. The selections, many of which have not been readily accessible, follow the development of the philosophy of science from 1786 to 1927. Each selection is preceded by a brief introduction by the editor designed to familiarize the reader with a particular philosopher and provide insights into his work.

Joseph J. Kockelmans divides the selections into several sections. Part 1, from 17861850, includes chapters by Immanuel Kant, on the metaphysical foundations of natural science, John Frederick William Herschel, on experience and the analysis of phenomena, William Whewell, on the nature and conditions of inductive science, and John Stuart Mill, on induction and the law of universal causation; part 2, from 18701899, includes chapters by Hermann Von Helmholtz, on the origin and significance of geometrical axioms, William Stanley Jevons, on the philosophy of inductive inference, John Bernard Stallo, on the kinetic theory of gasses and the conditions of the validity of scientific hypotheses, Ernst Mach, on the economical nature of physical inquiry, Karl Pearson, on perceptual and conceptual space, Emile Boutroux, on mechanical laws, Heinrich Hertz, on the appropriateness, correctness, and permissibility of scientific theories, and Ludwig Boltzmann, on the fundamental principles and basic equations of mechanics.

The third part, covering the first decade of the twentieth century, includes chapters by Henri Jules Poincare, on science and reality, Charles Peirce, on Induction, Pierre Marie Duhem, on the laws of physics, William Ostwald, on energetism and mechanics, Emile Meyerson, on identity of thought and nature as the final goal of science, Ernst Cassirer, on functional concepts of natural science; part 4, from 19101927, includes chapters by Charles Dunbar Broad, on phenomenalism, Alfred North Whitehead, on time, space, and material, Bertrand Russell, on the world of physics and the world of sense, Norman Robert Cambbell, on the meaning of science, Moritz Schlick, on basic issues of the philosophy of natural science, and Percy Williams Bridgman, on the concepts of space, time, and causality.

Philosophy of Science provides a concise single volume text to the discipline and enables students to understand and evaluate the various trends in our contemporary philosophy of science.

Joseph J. Kockelmans is professor emeritus of philosophy at the Pennsylvania State Univers