Phytochemistry of Plants of Genus Rauvolfia 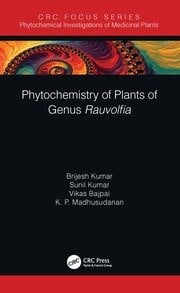 Phytochemistry of Plants of Genus Rauvolfia

Rauvolfia species, commonly known as Sarpagandha, has been traditionally used in Ayurveda for curing high blood pressure, hypertension, snake bites, fever, and mental illnesses. Due to its wide variety and differences in chemical composition, it is necessary to develop an efficient and reliable method for rapid screening and determination of phytochemicals in the extracts of the Rauvolfia species. This book will provide qualitative and quantitative comparative phytochemical investigations of selected medicinal plants from the Rauvolfia genus using liquid chromatography-mass spectrometry (LC-MS) techniques. The results will help in assuring the efficacy and safety of Rauvolfia herbal products.

Brijesh Kumar is a Professor (AcSIR) and Chief Scientist of sophisticated analytical instrument facility division, CSIR-Central Drug Research Institute, Lucknow, India. Currently he is facility in charge at Sophisticated Analytical Instrument Facility (SAIF) division of CSIR-CDRI. He has completed his PhD from CSIR-CDRI Lucknow (Dr. R.M.L Avadh University Faizabad UP, India). He has to his credit 7 book chapters, one book and 145 papers in International journal of repute. His current area of research is applications of Mass Spectrometry (DART MS/Q-TOF LC-MS/4000 Q Trap LC-MS/ Orbitrap MSn) for qualitative and quantitative analysis of molecules for quality control and authentication/standardization of Indian medicinal plants/parts and their herbal formulations. He is also involved in identification of marker compounds using statistical software to check adulteration/substitution.

Sunil Kumar is currently working as an assistant professor at Ma Kanshiram Government Degree College, Farrukhabad, Uttar Pradesh, India. He has completed his Ph.D. under supervision of Dr. Brijesh Kumar on Application of Mass Spectrometric Techniques in Qualitative and Quantitative Analysis of Phytoconstituents and Identification of Chemical Markers by Chemometric Technique in Phyllanthus and Rauwolfia Spp. in Sophisticated Analytical Instrument Facility at CSIR-Central Drug research Institute Lucknow. His research interest includes qualitative and quantitative analysis of phytochemicals using LC-MS/MS analysis.

Vikas Bajpai completed his PhD from the Academy of Scientific and Innovative Research (AcSIR), New Delhi, India and carried out his research work under supervision of Dr. Brijesh Kumar at CSIR-Central Drug research Institute Lucknow. His research interest includes development and validation of LC-MS/MS methods for qualitative and quantitative analysis of phytochemicals in Indian medicinal plants.

K. P. Madhusudanan is a mass spectrometry scientist born in 1947 in Kerala, India. He obtained his doctoral degree in 1975 specializing in Organic Mass Spectrometry in National Chemical Laboratory, Pune, India. He worked as a scientist and Head, Sophisticated Analytical Instrument Facility in Central Drug Research Institute, Lucknow until 2007. His research experience since 1970 includes various aspects of organic mass spectrometry such as fragmentation mechanism, gas phase unusual reactions, positive and negative ion mass spectrometry of natural products using various ionization techniques including DART, effects of metal cationization, LC/MS and MS/MS applications and quantitative analysis of drugs and metabolites. He authored more than 150 research publications. He was a member of the editorial board of Journal of Mass Spectrometry during 1995-2007. He is a fellow of the National Academy of Sciences, Allahabad, India. At present he lives in Kochi.