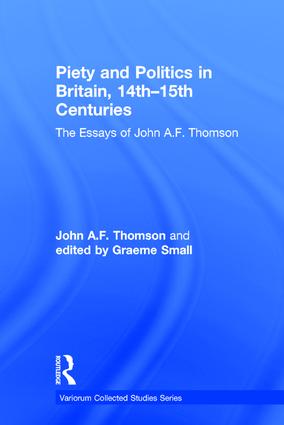 This volume explores a range of topics during a turbulent period in British history, with particular emphasis on political change and popular piety. On the eve of the Reformation, religious beliefs were shaped by a church which was falling under the growing control of the state, and by responses to England's one and only heretical movement, Lollardy. In political life, gradual disengagement from a cross-Channel political world was followed by civil war and the eventual rise of a strong Tudor monarchy. As this volume demonstrates in a number of ways, the impact of many of these macro changes was felt across the British Isles, not just in England. But the studies presented here frequently explore major change through the experience of the middling sort: the gentry active in local government, the English merchants and Scottish immigrants making important life choices in major cities, or the industrious clerics charged with the routine administration of the church. By looking at the case studies of these men in more detail, we begin to appreciate that even in this age of great change, there were profound continuities which carried through into the sixteenth century. Along the way, too, new light is thrown on the authorship, date and redaction of texts which continue to shape our understanding of late medieval British history.

Contents: Preface; Part 1 Popular Piety and Heresy in the British Isles: St Eilund of Brecon and her cult; Wealth, poverty and mercantile ethics in late medieval London; Piety and charity in late medieval London; Tithe disputes in later medieval London; Orthodox religion and the origins of Lollardy; A Lollard rising in Kent: 1431 or 1438?; John Foxe and some sources for Lollard history: notes for a critical appraisal; Knightly piety and the margins of Lollardy. Part 2 The Church and the British Isles in the late Middle Ages: Papalism and conciliarism in Antonio Roselli’s Monarchia; ’The well of grace’. Englishmen and Rome in the 15th century; Innocent VIII and the Scottish Church; Two Exeter decanal elections, 1509; Richard Tollet and Thomas Cornish: two West Country early Tudor churchmen; Some new light on the elevation of Patrick Graham; Bishop Lionel Woodville and Richard III. Part 3 Lords and Laymen in 15th-Century England: The Courtenay family in the Yorkist period; Richard III and Lord Hastings - a problematical case reviewed; John de la Pole, Duke of Suffolk; Scots in England in the 15th century. Part 4 Sources and Problems in Late Medieval English History: ’Warkworth’s Chronicle’ reconsidered; ’The Arrival of Edward IV’ - the development of the text; The continuation of ’Gregory’s Chronicle’ - a possible author; The death of Edward V: Dr Richmond’s dating reconsidered; Index.