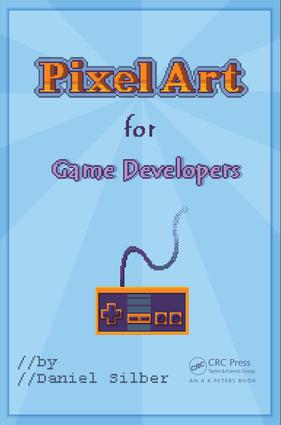 Is the art for your video game taking too long to create? Learning to create Pixel Art may be the answer to your development troubles. Uncover the secrets to creating stunning graphics with Pixel Art for Game Developers. The premier how-to book on Pixel Art and Pixel Art software, it focuses on the universal principles of the craft.The book provide

Why Pixel Art? Pixel Art: The Technology of Yesterday Today! Who Am I and Why Do I Know So Much about Pixel Art? Software: Set Up Your Working Environment. Making Pixel Art: Doing Lines. Coloring Inside the Lines. Drawing Secrets Revealed: It's All Smoke and Mirrors. Shading. Animating Pixels: The Shock and Horror of Being Flashed by a Pixel. Tiled Backgrounds. You're Doing It Wrong: Things to Avoid. Interviews with Game Developers. Resources.

Dan Silber is a game developer who has been credited for Pixel Art on dozens of games with licenses, including Marvel, Nickelodeon, Pixar, and Disney. His work has appeared on games that span multiple platforms including PC, Nintendo DS, and GBA. In addition to working with Pixel Art, he is a programmer, musician, and accomplished 3D Artist-with work that has appeared in an exhibit in the Smithsonian's Air and Space Museum. Dan owns the game development studio Interstellar Tortoise and has written several indie games.

If you want to know more about him, check out www.dansilber.com and www.interstellartortoise.com