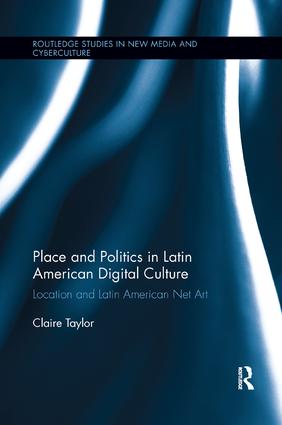 This volume explores one of the central issues that has been debated in internet studies in recent years: locality, and the extent to which cultural production online can be embedded in a specific place. The particular focus of the book is on the practices of net artists in Latin America, and how their work interrogates some of the central place-based concerns of Latin(o) American identity through their on- and offline cultural practice.

Six particular works by artists of different countries in Latin America and within Latina/o communities in the US are studied in detail, with one each from Uruguay, Chile, Argentina, Colombia, the US-Mexico border, and the US. Each chapter explores how each artist represents place in their works, and, in particular how traditional place-based affiliations, or notions of territorial identity, end up reproduced, re-affirmed, or even transformed online. At the same time, the book explores how these net.artists make use of new media technologies to express alternative viewpoints about the locations they represent, and use the internet as a space for the recuperation of cultural memory.

"Place and Politics in Latin American Digital Culture is bound to become a permanent reference not only in Latin American Studies but also among various disciplines in new media and the digital humanities. A much needed interdisciplinary contribution to the study of globalization in all its forms." -- Eduardo Navas, Eugene Lang College, The New School for Liberal Arts, USA

This series is our home for innovative research in the field of digital media. It includes monographs and targeted edited collections that provide new insights into this subject as its influence and significance grow into the twenty-first century.