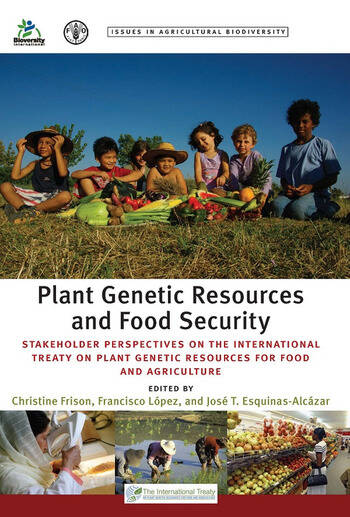 The International Treaty on Plant Genetic Resources for Food and Agriculture (ITPGRFA) is a pivotal piece of recent legislation, providing a route map for the use of such resources for sustainable agriculture and food security.

Plant Genetic Resources and Food Security explains clearly the different interests and views at stake between all players in the global food chain. It touches upon many issues such as international food governance and policy, economic aspects of food and seed trade, conservation and sustainable use of food and agricultural biodiversity, hunger alleviation, ecological concerns, consumers' protection, fairness and equity between nations and generations, plant breeding techniques and socio-economic benefits related to food local economies.

The book shows that despite the conflicting interests at stake, players managed to come to an agreement on food and agriculture for the sake of food security and hunger alleviation in the world. Published with the Food and Agriculture Organization (FAO) of the United Nations and with Bioversity International.

Christine Frison is a lawyer currently conducting a PhD research at the Catholic University of Louvain (Belgium) on international law and governance of plant genetic resources for food and agriculture. She is also a research fellow at the Centre for International Sustainable Development Law (Montreal, Canada) and carries out consultancy contracts for various international organisations (including the United Nations Environment Programme), NGOs and governments (e.g. Belgian Federal Ministry for the Environment).  Francisco Lopez is Treaty Support Officer for the International Treaty on Plant Genetic Resources for Food and Agriculture and is based at the Food and Agriculture Organization (FAO) of the United Nations, Rome, Italy.  Jose T. Esquinas-Alcazar is currently the Director of the Catedra on Studies on Hunger and Poverty of the University of Cordoba, and has worked for 30 years in FAO as Secretary of the FAO's intergovernmental Commission on Genetic Resources for Food and Agriculture.