Platonism Pagan and Christian
Studies in Plotinus and Augustine 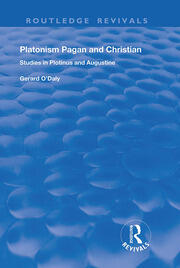 Platonism Pagan and Christian: Studies in Plotinus and Augustine

This title was first published in 2001. A collection of fifteen studies which explore topics in the psychology and philosophy of mind of Plotinus, Augustine, and Boethius, as well as the development of Augustine's views on history and Roman religion.

Contents: Preface; Plotinus' philosophy of the self; The presence of the One in Plotinus; Memory in Plotinus and two early texts of St Augustine; Did St Augustine ever believe in the soul's pre-existence?; Time as distentio and St Augustine's exegesis of Philippians 3, 12-14; Augustine on the measurement of time: some comparisons with Aristotelian and Stoic texts; Anima, error, and falsum in some early writings of St Augustine; Sensus interior in St Augustine, De libero arbitrio 2.3.5-6.51; Augustine on the origin of souls; Predestination and freedom in Augustine's ethics; Hierarchies in Augustine's thought; Remembering and forgetting in Augustine, Confessions X; Augustine's critique of Varro on Roman religion; Thinking through history: Augustine's method in the City of God and its Ciceronian dimension; Sense-perception and imagination in Boethius, Philosophiae Consolatio 5 m. 4; Index.

'As one has come to expect with Variorum's Collected Studies Series, the book is well produced and is enormoulsy convenient since some of the articles herein were initially published in Festschriften or acta that are not readily available... this is a book that belongs in every library that supports research into late ancient philosophy and religion.' Heythrop Journal