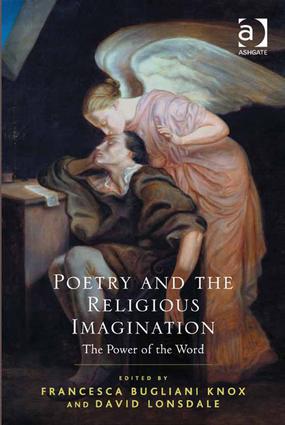 Poetry and the Religious Imagination

The Power of the Word, 1st Edition

"The editors merit praise for their astute choices of contributors. Additionally, I note the superbly appropriate painting whose reproduction graces the book’s cover. It is The Kiss of the Musefrom Paul Cezanne’s early Romantic period. Portrayed is a male poet leaning back from his desk gazing upward for inspiration as a female angel stands behind and gently kisses the poet’s forehead. This depiction splendidly foreshadows the rich and soul-stirring scholarship within."

"A fine collection of essays by young and established scholars, which asks some crucial questions: What is the relationship between theology and poetry? Faith and imagination? Devotion and art? It will help to open up a long-neglected, but absolutely vital field of intellectual investigation. Greatly to be welcomed."

"For the authors in this rich volume, poetry is not merely an artful form of discourse; it exemplifies a way of thinking. Poetic imagination underlies and overlaps with the mind’s quest for the metaphysical and the religious. In a mixture of theoretical considerations and case studies, these essays offer a valuable summary of the state of the question of the relation of theology and literature, and they provide enticing and often delightful insights into different styles of poetic imagination as it opens on to the transcendent."

"This collection of essays has an impressive range, with contributions on Aquinas and Dante from one historical period, on Constable and Shakespeare from another, and on Eliot, Levertov, Rilke and Wallace Stevens from nearer our own times. The result might have been indigestible but in fact the work is full of rich insights, helped not least by the editors’ decision to arrange the material by theme rather than chronologically, and also by commissioning two splendid introductory essays that provide the broader context for such discussions in twentieth century literary theory and theology."

- David Brown, ITIA (the Institute for Theology, Imagination and the Arts), University of St Andrews, UK

Francesca Bugliani Knox graduated in 1976 from Pisa University (Dott. Lett.) and was senior lecturer in the English Department of the UniversitÃ  IULM, Milan, from 1986 to 2002. In 2009 she was awarded a PhD by Heythrop College, University of London. She is now Research Associate at Heythrop College and Teaching Fellow at UCL. Her publications include translations into Italian as well as several books and articles on various aspects of English and Italian literature from the Renaissance to the present. Since early on her research interest has focused on the relationship between literature and Christian spirituality. Together with Luca Panieri she edited Poesia e comunicazione (Lint 2001). Her recent book, The Eye of the Eagle: John Donne and the Legacy of Ignatius Loyola (Peter Lang 2011) was reviewed favourably in the TLS, Essays in Criticism, Renaissance Quarterly, Church History and Religious Culture and The Heythrop Journal. At present she is editing a collection of essays on Mgr Ronald Knox for PIMS and writing John Donne’s Itinerary for Open Book Publishers Cambridge. David Lonsdale taught courses in Christian Spirituality and Pastoral Theology at postgraduate level at Heythrop College, University of London for more than 25 years before retiring in 2012. He was also joint editor of The Way, and The Way Supplement, international journals of Christian spirituality from the mid-1980s to the mid-1990s. His published books, Eyes to See, Ears to Hear: An Introduction to Ignatian Spirituality (1990, revised edition 2000) and Dance to the Music of the Spirit (1992) have been much used in formation and education and translated into several languages. The places where literature, theology, spirituality and life meet have long been among his research and teaching interests and he has recently published several articles in this area.