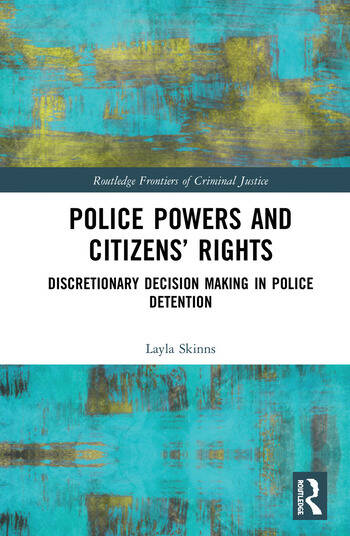 Police detention is the place where suspects are taken whilst their case is investigated and a case disposal decision is reached. It is also a largely hidden, but vital, part of police work and an under-explored aspect of police studies. This book provides a much-needed comparative perspective on police detention. It examines variations in the relationship between police powers and citizens’ rights inside police detention in cities in four jurisdictions (in Australia, England, Ireland and the US), exploring in particular the relative influence of discretion, the law and other rule structures on police practices, as well as seeking to explain why these variations arise and what they reveal about state-citizen relations in neoliberal democracies.

This book draws on data collected in a multi-method study in five cities in Australia, England, Ireland and the US. This entailed 480 hours of observation, as well as 71 semi-structured interviews with police officers and detainees. Aside from filling in the gaps in the existing research, this book makes a significant contribution to debates about the links between police practices and neoliberalism. In particular, it examines the police, not just the prison, as a site of neoliberal governance.

By combining the empirical with the theoretical, the main themes of the book are likely to be of utmost importance to contemporary discussions about police work in increasingly unequal societies. As a result, it will also have a wide appeal to scholars and students, particularly in criminology and criminal justice.

3. The Police in Context: Neoliberalism in the Selected Countries

4. The Police in Context: Patterns of Policing in the Selected Countries

6. Abiding by the Rules? Legality in Police Custody

Layla Skinns is a Reader in Criminology in the Centre for Criminological Research, University of Sheffield, having formerly worked and studied at the Institute of Criminology, University of Cambridge and the Institute for Criminal Policy Research, King’s College London. She has a longstanding interest in police and policing, in particular in how policing agents use their authority. A key focus of her research has been on police detention in England and Wales, but also in other parts of the anglophone world. In this setting, she is interested in police powers and their relationship with the law, police cultures and police discretion, and furthermore, how they impact on equality and state-citizen relations. She is also interested in how the public – particularly detainees – perceive the police, which links her research to discussions about police legitimacy and ‘good’ policing.

"Skinns provides a critical, thoughtful and thought provoking thematic analysis of how police power is exercised in the police station. The original comparative analysis, expertly synthesised, starkly juxtaposes the experience in each jurisdiction but essentially enables a richly nuanced understanding of the impact of neoliberalism and police culture. Indispensable for policing scholars."

"This excellent book is distinguished by its combination of empirical depth, comparative breadth and theoretical ambition. Layla Skinns confirms her reputation as the pre-eminent international researcher on highly significant political tensions between police powers and citizens’ rights in police detention."

"Layla Skinns’ wonderful book, based on detailed fieldwork, observations and interviews, is an important, sensitive and powerful analysis of patterns of detention in Australia, the US, Ireland and England. I found it rewarding, subtle and grounded in comparative analysis and socio-legal reasoning."

"This book draws on a rich tradition of empirical and theoretically-informed research in criminal justice in common law jurisdictions. But it breaks new ground in being based on empirical studies of police custody in four of these comparable jurisdictions. Not only are there few other recent comparative studies of police custody, but this book also relates this aspect of policing to neo-liberalism – the dominating political practice of the early 21st Century. But why ‘police powers and citizens rights’, and not ‘police powers and suspects rights’? The point is that Layla Skinns rightly wants to reclaim ‘suspects’ as ‘citizens’, in a challenge to the neoliberal ‘othering’ of suspects and convicted people that reduces all marginalised groups to ‘citizen-minus’. As might be expected, she concludes that police detention practices entrench existing patterns of inequality in all these jurisdictions, as indeed do other forms of policing and other ways in which the State exercises authority over citizens. But these things are not entirely monolithic, as is evident from her evidence that American police operate ‘beyond the rules’ more than their British, Irish and Australian equivalents. And so she offers suggestions that would at least ameliorate some of the worst practices that she documents. The book also opens up valuable avenues for further research. Sadly, the funding and opportunities that existed in the late 20th Century for research of this kind have shrunk in the last 20 years. But the space for adventurous and challenging research has not disappeared. This book shows what exciting possibilities there still are."