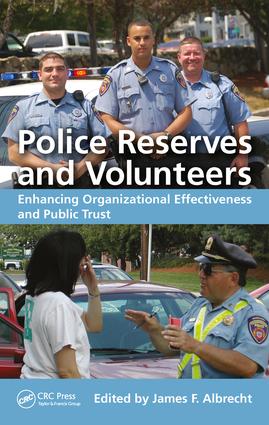 Reductions in police department funding have raised the importance of volunteers in enhancing organizational performance, improving community trust and confidence, and at times accomplishing basic tasks to maintain public safety and security. During a period when police administrators are asked to do more with less, and to engage in smarter, community-oriented policing, citizen volunteers are an invaluable resource. Police Reserves and Volunteers is an invaluable primer for those looking to understand the benefits and challenges involved in the use of the volunteers within global law enforcement agencies.

Using cases from a range of specialists and precincts, this edited volume provides a rare window into police administration from the state legislation that regulates police reserves in California to the local models observed in many counties and cities across the United States. Police Reserves and Volunteers offers volunteers, local elected officials, and law enforcement straightforward guidelines to enhance police goals and build public trust in local communities.

Chapter One: Introduction: The Obvious Need for Volunteers in Policy

Chapter Two: Volunteers in Policing in the USA

Chapter Three: The Rewards and Challenges of Using Volunteers in Policing

Chapter Five: An Abundance of Auxiliary Police and Volunteer Personnel in the NYPD

Chapter Fifteen: The Reserve Police Force in the Netherlands

Chapter Eighteen: A ‘Special’ Kind of Policing: Volunteer Policing in England and Wales

Chapter Nineteen: The Police Community Service Officer in the United Kingdom: A Midpoint between Career and Volunteer Officers

James "Jimmy" F. Albrecht is a professor of criminal justice and homeland security at Pace University in New York City. Professor Albrecht has 25 years of front-line law enforcement experience, and had previously held a number of executive positions including police chief of criminal investigations in the joint European Union/U.S. (EULEX) Police in Kosovo (former Yugoslavia). He retired as NYPD captain and regional commander after serving 22 years, which included direct response to the tragic September 11, 2001 attacks on the World Trade Center. He received his Ph.D. in criminal justice at the University of New Haven (Connecticut).