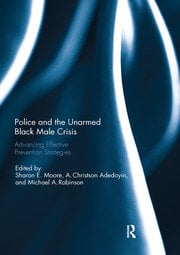 Presenting both historical and contemporary discussions and coverage, this book provides an in-depth and critical analysis of police brutality and the killing of unarmed black males in the United States of America. Within the book, contributors cover five key areas: the historical context and contemporary evidence of police brutality of unarmed black people in the USA; the impact of police aggression on blacks’ well-being; novel strategies for prevention and intervention; the advancement of a cordial relationship between police and black communities; and how best to equip the next generation of scholars and professionals. Each contributor provides a simple-to-understand, thought-provoking, and creative recommendation to address the perennial social ill of police brutality of black males, making this book an excellent resource for students, scholars and professionals across disciplinary spectrums. This book was originally published as a special issue of the Journal of Human Behavior in the Social Environment.

Part I: The historical context and contemporary evidence of police brutality of unarmed Black people in the United States

1. A death to justice (The shooting of Michael Brown—Summer 2014) Sylvia Telafaro

2. From "brute" to "thug:" The demonization and criminalization of unarmed Black male victims in America CalvinJohn Smiley and David Fakunle

Part II: The impact of police aggression on Blacks’ well-being across the lifespan

6. The nation’s unprotected children and the ghost of Mike Brown, or the impact of national police killings on the health and social development of African American boys Raja Staggers-Hakim

7. The death of Black males: The unmasking of cultural competence and oppressive practices in a micro-aggressive environment Folusho Otuyelu, Warren Graham, and Shakira A. Kennedy

Part V: Equipping the next generation of scholars and professionals

Sharon E. Moore is Professor of Social Work in the Raymond A. Kent School of Social Work at the University of Louisville, USA. Her primary research is related to African American faculty at Predominantly White Institutions, as well as issues that affect Black males. She is a national trainer on human diversity issues.

is an Associate Professor of Social Work in the Department of Social Work at Samford University, Birmingham, Alabama, USA. His research interests include church-based social work; the integration of faith and learning; the nexus of religion/spirituality in addressing socio-economic, educational, and health disparities among African Americans; and African immigrants.

is an Assistant Professor in the School of Social Work at the University of Georgia, USA. His research interests address the health and well-being of African Americans, and other underserved populations, particularly in relation to substance abuse and mental disorders.