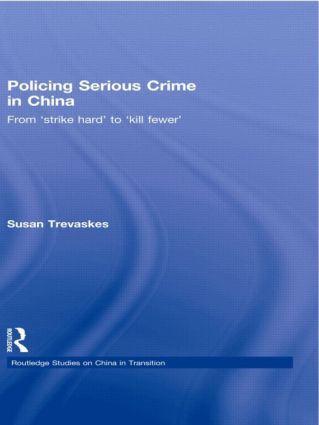 Despite a resurgence in the number of studies of Chinese social control over the past decade or so, no sustained work in English has detailed the recent developments in policy and practice against serious crime, despite international recognition that Chinese policing of serious crime is relatively severe and that more people are executed for crime in China each year than in the rest of the world combined.

In this book the author skilfully explores the politics, practice, procedures, and public perceptions of policing serious crime in China, focusing on one particular criminal justice practice – anti-crime campaigns – in the period of transition from planned to market economy from the 1980s to the first years of the twenty-first century. Susan Trevaskes analyzes the elements that led to the Hard Strike becoming the preferred method of attacking the growing problem of serious crime in China before going on to examine the factors surrounding the failure of the Hard Strike as a way of addressing the main problems of serious crime in China today, that is drug trafficking and organized crime .

Drawing on a rich variety of Chinese sources Serious Crime in China is an original and informed read for scholars of China, criminologists generally and the international human rights community.

"In this book, Trevaskes skillfully examines the politics, practice, procedures, and public perceptions of yanda anti-crime campaigns in the first 25 years of the post-1978 reform period. Trevaskes develops the concept of campaign policing and justice in China in order to describe the Chinese criminal justice practice to punish criminals “harshly and swiftly” in response to an increasing crime rate since the start of its economic reform in the 1980s."– Dr Jianhua Xu,University of Hong Kong