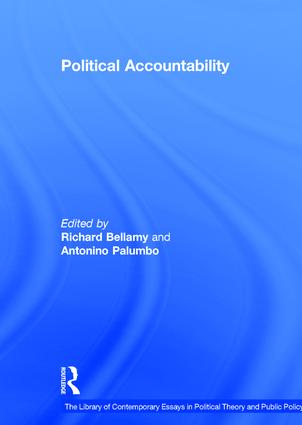 Political accountability forms a cornerstone of modern democracy: it directs the political system towards the public interest and allows the exercise of the principles of autonomy and self-determination that lie at the core of democratic politics. Sadly, existing democracies, with their large, centralized bureaucracies, have evolved in ways that progressively undermine the ability of citizens to keep their representatives accountable and political regimes responsive. Far from reversing this trend, the neoliberal reforms introduced since the 1980s have increased that accountability gap. Globalization and the alleged passage from 'government' to 'governance' have aggravated the problem further. The notion of accountability that survives these changes is a problematic form of auditing carried out by a constellation of quangos, autonomous agencies and NGOs whose own accountability is problematic. This volume collects the main contributions to current debates on political accountability. It explores the challenges traditional conventions of accountability face today at the domestic, trans- and international levels and indicates the distinctive solutions those challenges require.