Political Economy and Liberalism in France
The Contributions of Frédéric Bastiat 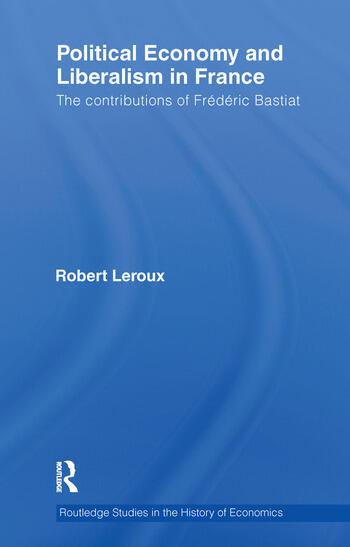 Political Economy and Liberalism in France: The Contributions of Frédéric Bastiat

The purpose of this book is to provide a comprehensive analysis of the work of Frédéric Bastiat (1801-1850), one of the towering intellectual figures of nineteenth century France. More than anyone else of his time, Bastiat personified the struggle of liberalism and science against socialism and utopia. Between 1844 in 1850, his campaign for the idea of liberty and his commitment to the discipline of political economy made him one of the most vigorous champions of economic liberalism in France.

Bastiat put forth one of the most ambitious interpretations of the liberalism of his time, one that entailed both a critique of primitive socialism and a concern to provide political economy with a theoretical foundation. His thinking is far more sophisticated than would appear at first glance. Nor can it be confined, as so many commentators would have us believe, to its strictly economic dimension. The themes that Bastiat addressed – free trade, competition, labour, among others – certainly helped to reduce it to this dimension. Yet he did not limit himself to these issues, even if he dealt with them at length. He also paid close attention to the political, moral, social and religious dimensions.

Coming, as Bastiat’s writing did, at a decisive moment in the history of French liberalism, the very existence of his work explodes the long-standing received idea to the effect that liberalism, and in particular economic liberalism, is the exclusive domain of Anglo-Saxon countries. Bastiat’s work thus offers a solid rebuttal to Hayek, who proclaimed "the total absence of a liberal tradition in France." This book should be of interest to students and researchers of many strands of economics, as well as those looking at French liberalism and the history of social science more generally.

Foreword Raymond Boudon  Introduction  1. The Context of a Life’s Work  2. Bastiat through his Correspondence  3. Bastiat and England  4. Salvation through Science  5. History and Progress  6. Issues and Debates  7. Freedom and its Foes  8. Social and Economic Harmonies

Robert Leroux is Professor of Sociology at the University of Ottawa, Canada.