Political Economy and Religion
Essays in the History of Economic Thought 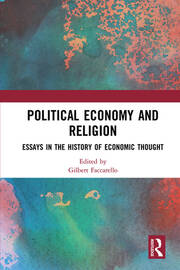 Political Economy and Religion: Essays in the History of Economic Thought

Ever since Antiquity, reflections about economic problems have always been intertwined with questions relating to politics, ethics and religion. From the 18th century onwards, economic thought seemed to have been gradually disentangled from any other field, and to have gained the status of an autonomous scientific discipline, especially with the later use of mathematics. In fact, the growth of economic knowledge never broke off any ties with these other fields, and, especially with religion and ethics, even though the links with them became less obvious, they only changed shape. This is what this book illustrates, each chapter dealing with different periods and authors from the Middle Ages to the present times. Focusing in turn on the thought of the Scholastics, Ibn Rushd (Averroes), John Calvin, the French liberal Jansenists, Dugald Stewart, David Ricardo, Henri de Saint-Simon, Charles de Coux and French Christian Political Economy, Auguste Comte and Émile Durkheim, Henry Sidgwick, Arthur Cecil Pigou, and finally John Maynard Keynes, the studies collected here show how religious themes played an important role in the development of economic thought. This book was originally published as a Special Issue of The European Journal of the History of Economic Thought.

Introduction – Sæculum  1. Agency, exchange, and power in scholastic thought  2. The concept of "lawfulness" in economic matters. Reading Ibn Rushd (Averroes)  3. The necessity to work, according to John Calvin’s duty of stewardship  4. Liberal Jansenists and interest-bearing loans in eighteenth-century France: a reappraisal  5. Defending free trade after physiocracy: On Dugald Stewart’s architectonic of passions, reason and Providence  6. Theological themes in Ricardo’s papers and correspondence  7. Religion and political economy in Saint-Simon  8. A dance teacher for paralysed people? Charles de Coux and the dream of a Christian political economy  9. Religion and the sociological critique of political economy: Altruism and gift  10. Henry Sidgwick, moral order, and utilitarianism  11. Pigou on philosophy and religion  12. Keynes and Christian socialism: Religion and the economic problem