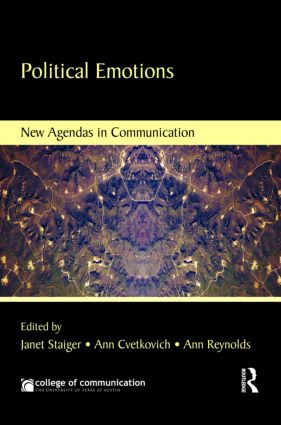 Political Emotions explores the contributions that the study of discourses, rhetoric, and framing of emotion make to understanding the public sphere, civil society and the political realm. Tackling critiques on the opposition of the public and private spheres, chapters in this volume examine why some sentiments are valued in public communication while others are judged irrelevant, and consider how sentiments mobilize political trajectories.

Emerging from the work of the Public Feelings research group at the University of Texas-Austin, and cohering in a New Agendas in Communication symposium, this volume brings together the work of young scholars from various areas of study, including sociology, gender studies, anthropology, art, and new media. The essays in this collection formulate new ways of thinking about the relations among the emotional, the cultural, and the political. Contributors recraft familiar ways of doing critical work, and bring forward new analyses of emotions in politics. Their work expands understanding of the role of emotion in the political realm, and will be influential in political communication, political science, sociology, and visual and cultural studies.

1. On Affect and Protest -- Deborah Gould

3. Babies Who Touch You: Reborn Dolls, Artists, and the Emotive Display of Bodies -- Michele White

4. The Transmission of Gothic: Feeling, Philosophy, and the Media of Udolpho -- Samuel Baker

Ann Cvetkovich is Ellen Clayton Garwood Centennial Professor of English at the University of Texas. She is the author of Mixed Feelings: Feminism, Mass Culture, and Victorian Sensationalism (Rutgers, 1992) and An Archive of Feelings: Trauma, Sexuality, and Lesbian Public Cultures (Duke, 2003).

Ann Reynolds is an Associate Professor in the Department of Art and Art History and the Center for Women’s and Gender Studies at the University of Texas at Austin. She is the author of Robert Smithson: Learning From New Jersey and Elsewhere (MIT, 2003) and is currently working on a new book, Home Movies: Creativity, Community, and Publics in New York, 1940–1970.

This series brings together groups of emerging scholars to tackle important interdisciplinary themes that demand new scholarly attention and reach broadly across the communication field’s existing courses. Each volume stakes out a key area, presents original findings, and considers the long-range implications of its "new agenda."