Political Geographies of the Post-Soviet Union 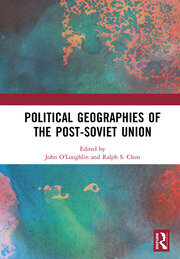 Political Geographies of the Post-Soviet Union

This comprehensive volume observes how, after 25 years of transition and uncertainty in the countries that constituted the former Soviet Union, their political geographies remain in a state of flux. The authors explore the fluid relationship between Russia, by far the dominant economic and military power in the region, and the other former republics. They also examine new developments towards economic blocs, such as membership in the European Union or the competing Eurasian Economic Union, as well as new security arrangements in the form of military cooperation and alliance structures.

This book reflects the broad range of changes across this important world region by engaging in insightful analysis of current developments in Central Asia, Ukraine, Russia, the Caucasus, and separatist regions. The authors explore new state alliances and the evolving cultural and geopolitical orientations of former Soviet citizens. Some chapters also examine the dynamics of wars that have occurred in the post-Soviet space, as well as how local political developments are reflected in electoral preferences and struggles over control of public spaces.

The chapters in this book were originally published in the journal Eurasian Geography and Economics.

1. Introduction: Political Geographies of the Post-Soviet Union 2. Who identifies with the "Russian World"? Geopolitical attitudes in southeastern Ukraine, Crimea, Abkhazia, South Ossetia, and Transnistria 3. The Eurasian Economic Union: the geopolitics of authoritarian cooperation 4. The US Silk Road: geopolitical imaginary or the repackaging of strategic interests? 5. Benevolent hegemon, neighborhood bully, or regional security provider? Russia’s efforts to promote regional integration after the 2013–2014 Ukraine crisis 6. (Dis-)integrating Ukraine? Domestic oligarchs, Russia, the EU, and the politics of economic integration 7. Building identities in post-Soviet "de facto states": cultural and political icons in Nagorno-Karabakh, South Ossetia, Transdniestria, and Abkhazia 8. The decline and shifting geography of violence in Russia’s North Caucasus, 2010-2016 9. Clearing the Fog of War: public versus official sources and geopolitical storylines in the Russia-Ukraine conflict 10. Cleavages, electoral geography, and the territorialization of political parties in the Republic of Georgia 11. The political geographies of religious sites in Moscow’s neighborhoods

John O’Loughlin is College Professor of Distinction in Geography at the University of Colorado-Boulder, USA. He has conducted field work for over 25 years in the states of the former Soviet Union on state building, national conflicts, and emerging geopolitical orientations.

is Emeritus Professor of Geography at Florida International University-Miami, USA. His research focuses on the interface between national security and geopolitics in the post-Soviet space.