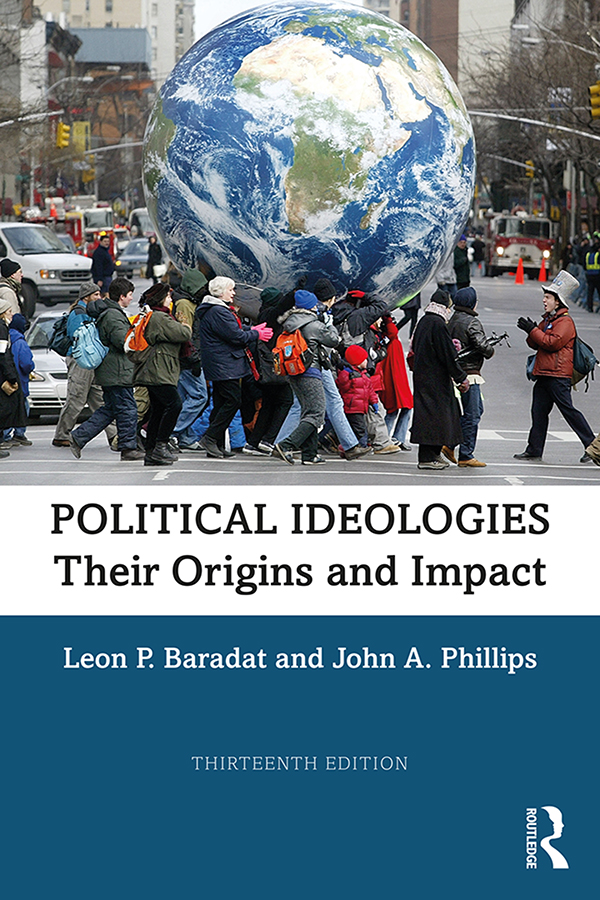 Their Origins and Impact, 13th Edition

Comprehensive yet accessible, this classic text, now in its thirteenth edition follows the evolution of political thought over 300 years. Organized chronologically, this text examines each ideology within a political, historical, economic, and social context. In addition to a thorough updating of examples and data, here’s what you’ll find in the new edition:

"Political Ideologies Their Origins and Impacts is an excellent book. It is very easy to understand and yet is very comprehensive. The authors are very good in defining terms, and providing examples. They also explain in excellent detail the major figures of the respective ideologies they are discussing. This provides a good frame of reference for students. In addition their historical discussions are very useful for students giving them a frame of reference for understanding the respective ideologies. This work is very useful in more advanced classes on ideology and political theory, and at the same time is easily understandable for students in lower level classes. The discussion questions at the end of each chapter make for good exercises for the students and are excellent reviews of the chapters." — John Miglietta, Professor of Political Science Tennessee State University

"A much loved and much used textbook, here in its updated 13th edition! In contrast to standard textbooks on political ideologies, this one recognizes the prevalent logic of nationalism and its imprint on other dominant ideologies. It also pays due attention to understanding democracy and the democratic process: an ideological intervention often underscored in other collections. Accessibly written, the textbook offers an entertaining yet rich narrative, engaging with political philosophy and politically relevant literature (e.g. Tolstoy!). The range of aptly selected photographs and active learning suggestions make this textbook a pedagogically invaluable tool in the classroom." —Nevena Nancheva, Kingston University London

"In this time of deep ideological polarization and conflict this new edition of Political Ideologies: Their Origins and Impact comes like a heavenly sent gift. At no time in our history has there been a greater need for the critical scrutiny and clarification of political ideas used often as popular marching orders. For myself and my students I deeply thank the editors for their diligence and painstaking retrieval of this work." —Fred Dallmayr, Packey J. Dee Professor, University of Notre Dame

"The authors have done a masterful job addressing issues of the day by showing the relevance of Political Theory. This updated text is a demonstration that Theory is not divorced from reality. It is superbly structured, clearly written, lucid, and engaging. Both teachers and students will find this text useful, timely, and highly relevant." — Daniel K. Gibran, Professor of International Security and Intelligence Studies, Tennessee State University

2. The Spectrum of Political Attitude

4. The Evolution of Democratic Theory

5. Liberal Democracy, Capitalism, and Beyond

11. Ideologies in the Developing World

is Professor of Political Science at MiraCosta College.