Political Issues for the Twenty-First Century 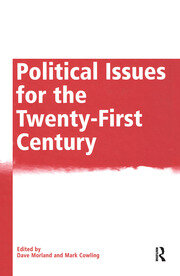 Political Issues for the Twenty-First Century

Assembling accessible and informative essays on contemporary debates and future issues in politics, this rewarding volume focuses on political developments in UK, European and international issues, and modern theoretical debates and problems. Each essay establishes the historical context before providing a speculative analysis of possible future developments. The collection presents a range of challenging and provocative accounts that deal with some of the most delicate, complex and fundamental issues that affect people living in Western Europe in the twenty-first century.

Both at the University of Teesside, Dr Dave Morland is Principal Lecturer in Sociology and Dr Mark Cowling is a Reader in Criminology.

’Political Issues For the Twenty-First Century offers an exhilarating ride through politics in the age of globalization. The chapters address critical issues with a freshness and level of engagement which is rare in such compilations. The book sustains a critical liveliness throughout and will provide an excellent text for issue-based courses.’ Professor Lawrence Wilde, Nottingham Trent University, UK 'This is a must-have book for anyone who wants to make sense of politics in the twenty-first century. It skillfully weaves together political theory, current affairs and historical perspectives to map out the key issues facing Britain, and the world, today. The question has often been put as to whether we have entered into a new era of politics after September 11th. This book helps to provide an answer.' Dr Peter Hayes, University of Sunderland, UK 'Political Issues for the Twenty-First Century has much to be praised for. Most chapters are easy enough to grasp, but thought-provoking at the same time. A plethora of issues are grouped well into readable sections.' Journal of European Affairs