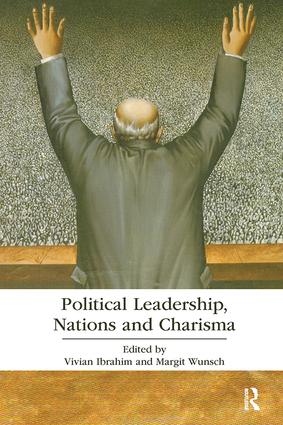 This ground-breaking and innovative book examines the influence of charisma on power, authority and nationalism. The authors both apply and challenge Max Weber’s concept of ‘charisma’ and integrate it into a broader discussion of other theoretical models.

Using an interdisciplinary approach, leading international scholars draw on a diverse range of cases to analyse charisma in benign and malignant leaderships, as well as the relationship between the cult of the leader, the adulation of the masses and the extension of individual authority beyond sheer power. They discuss idiosyncratic authority and oratory, and they address how political, social and regional variations help explain concepts and policies which helped forge and reformulate nations, national identities and movements. The chapters on particular charismatic leaders cover Abraham Lincoln, Kemal Atatürk, Adolf Hitler, Benito Mussolini, Gamal Nasser, Jörg Haider and Nelson Mandela.

Political Leadership, Nations and Charisma will appeal to readers who are interested in history, sociology, political communication and nationalism studies.

"This rich collection of essays, by leading academics from across the world, examines in critical depth Max Weber’s concept of charismatic leadership in the context of nations. Is charismatic leadership a result of how followers construct the idea of their leader or is it the intrinsic quality of charisma itself? The authors explore the personalities and purposes of leading figures across the nineteenth and twentieth centuries and question whether Weber’s concept needs revision, extension or rejection if applied globally.

Here is a collection of essays on the important theme of leadership, nations and charisma, which will be read with immense benefit by those interested in politics, sociology and history." - Lord Meghnad Desai, Emeritus Professor at London School of Economics (LSE)

"Margit Wunsch and Vivian Ibrahim have performed a stunning feat. Like an expose of a magician's tricks, this book opens our eyes by dissecting the charisma of nationalist leaders to reveal its profane sources. Rigorous examinations of psychological phenomena in history and politics are rare, but this book delivers magnificently. The editors explore whether charisma is primarily about psychology, or is produced by social roles and political coercion. They ask if charisma is a cause or merely an effect of success. Authors consider whether charisma can survive in a pluralistic democratic context. They distinguish between situations where cunning leaders project charisma onto the masses and instances when the people bestow it upon their anointed leader. They go on to show how charisma can inhere in entire nations and institutions, not merely in individuals. They ask whether it can change history, and if so, whether it is always a malign force or can it serve democracy well, as Max Weber hoped. Might charisma survive death and be successfully institutionalised? What is the connection between charismatic individuals and heroes, icons or exemplars of national character? Does charisma exhibit a different quality in 'disenchanted' mass modernity? In non-western societies? Might Jesus, Muhammad, Joan of Arc and other historical figures exert charisma from beyond the grave, and how do latter-day charismatics appropriate their mantle? Is charisma inherent in charismatic figures or is it 'made' by image management, spin, dress and staging? This book offers a sustained analysis of these questions and much more. John Breuilly's introduction weaves an impressive theoretical account through the embarrassment of riches provided by the book's star-studded cast. From Hitler and Mussolini to Mandela and Gandhi, FDR and Lincoln to Haider, Napoleon to the Virgin Mary, this book will forever change the way we look at nationalist charisma." - Eric Kaufmann, Professor of Politics, Birkbeck College, University of London

1. Introduction: Weber’s Concept of Charismatic Domination John Breuilly. Part I: Nations and Charisma 2. The Charisma of Nations Anthony D. Smith 3. Charisma and Founding Fatherhood David Martin 4. National Leadership, National Character and Charisma Hedva Ben-Israel Part II: The Cult of the Leader, The Role of the Masses 5. Charisma and the Cult of the Hero in Risorgimento Italy Lucy Riall 6. Abraham Lincoln: The Apotheosis of a Republican Hero Don H. Doyle 7. Mussolini and Hitler: Charisma, Regime and National Catastrophe MacGregor Knox 8. Nasser and the Charisma of Language Vivian Ibrahim Part III – Charisma in the Present Day 9. In the Name of the Father, the Teacher and the Hero: The Atatürk Personality Cult in Turkey Erik-Jan Zürcher 10. Talking about Jörg Haider: Enactment of Volksnähe Emo Gotsbachner 11. Madiba Magic: Nelson Mandela’s Charisma Elleke Boehmer

Vivian Ibrahim is Croft Assistant Professor of History and International Studies and holds a PhD from the School of Oriental and African Studies (SOAS), University of London.

Margit Wunsch is currently a PhD Candidate at the London School of Economics.