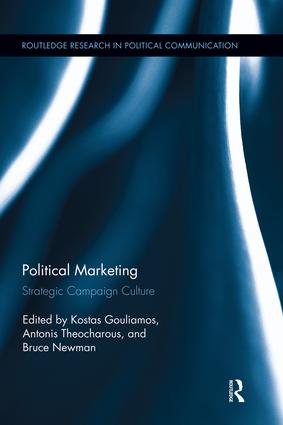 A guiding principle in creating Political Marketing has been to examine the ways in which culture, politics, and society interrelate in the field of political marketing. In the course of the book, the editors and contributors consider ‘culture’ as a distinctive concept with transformative capacities that need further and deeper development in the engineering of the political marketing process. This may be introduced and, consequently, lead to broad formulation of a ‘campaign culture’. Indeed, understanding and adapting a broader ‘campaign culture’, political marketing models may be seen as sets of pathways of key resources resulting viability in human assets, forms of influence, class stratification, alternative flows of information or networking and intercultural knowledge – sharing activity.

This book consists of 18 chapters which deal with aspects of political marketing and ‘campaign culture.’ Theoretical chapters are found first, followed by two chapters that deal with theoretical issues which became a subject of research. Next presented are the articles that study aspects of electoral behavior, followed by the papers that analyze aspects of nationalism & national identity. Finally, the book concludes with three case studies on various issues in political marketing.

"This is a ground-breaking book which deals in depth with the critical importance of culture in effective political marketing campaigning both in practice and theory. It contains a polymathic collection of insightful material from around the world and is explored by the masters of the discipline".

Dr. Kostas Gouliamos is elected Vice Rector at the European University Cyprus. He has been appointed Member to the Steering Committee for Higher Education & Research (CDED) of the Council of Europe in Strasbourg/France. He is also a member of the Scientific Advisory Board of the European Social Survey. He is the author and/or editor of many books, chapters and papers, as well as contributor to two World Reports (published by the International Institute of Communication) on issues pertinent to the subjects of media, culture, and communication. He is the editor of the Journal of Critical Studies in Business and Society and Senior Editor of the Journal of Political Marketing. His latest work, The Marketing of War in the Age of Neo-militarism, was published by Routledge Advances in Sociology.

is an Assistant Professor at the Department of Hotel and Tourism Management, School of Management and Economics at the Cyprus University of Technology. He is the national representative of the Program Committee for Social Sciences and Humanities of the EU's 7th Framework Program. Dr. Theocharous has also served as national coordinator for two ESFRI projects: the European Social Survey (ESS) and the Digital Research Infrastructure for the Arts and Humanities (DARIAH). He also acted as a scientific coordinator for more than 30 EU or nationally funded research projects.

is Professor of Marketing and Wicklander Fellow of Business Ethics at DePaul University. Professor Newman was recently a Visiting Scholar at Meiji University in Tokyo, Japan; a William Evans Visiting Fellow at the University of Otago, New Zealand; and a Visiting Scholar in the Department of Political Science at Stanford University and in the Institute of Government at the University of California-Berkeley. He is the founding Editor-in-Chief of the Journal of Political Marketing, and has written several scholarly articles and books on the subject of political marketing, including: The Marketing of the President (1993), The Mass Marketing of Politics: Democracy in an Age of Manufactured Images, Handbook of Political Marketing, and more recently a co-author of A Cross-Cultural Theory of Voter Behavior (Taylor & Francis) and Political Marketing: Theoretical and Strategic Foundations (M. E. Sharpe, 2011).