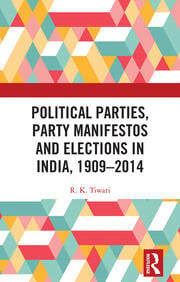 In the parliamentary system of government, manifestos constitute and represent an important aspect of the democratic electoral politics as statements of a party’s ideology, response and policy. This book offers an examination of election manifestos of different political parties in India at the national level. It explores the manifesto as an input to the policy process and presents a comparative perspective and understanding on the issues and approaches of the national political parties on key affairs.

The book traces the evolution of the electoral system, political parties and party manifestos in India as they emerged and developed over time. It looks at the Statutes of 1909, 1919 and 1935 along with the party manifestos and elections until 1945–46. The author further analyses Constituent Assembly debates on the electoral system and the stances of political parties on national reconstruction through documents from parties, including the Indian National Congress, the Communist Party of India, the Socialist Party, Jana Sangh and the All India Scheduled Castes Federation.

Covering manifestos of sixteen Lok Sabha Elections (from the first general election of 1952 to 2014), this book provides a comprehensive overview of how major political parties think on significant social, economic, political, foreign and defence-related issues. It will be useful to scholars and researchers of political science, election studies, modern Indian history, public administration, law and governance, sociology, media and journalism as also to legislators and policymakers.