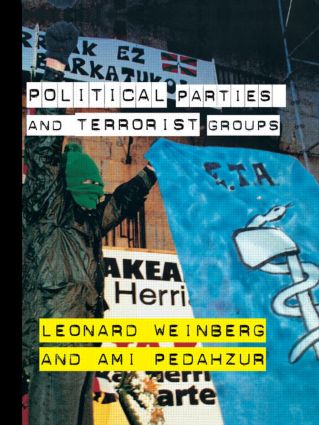 What is the relationship between the political parties that embrace the democratic process and terrorist groups, which eschew the legal and procedural strictures of democracy?

This acclaimed volume provides a detailed theoretical and empirical analysis of this controversial issue. Drawing on a vast array of data, the authors examine a large number of international case studies from Italy, Spain, Lebanon, Turkey, Iran, Israel, Palestine, Peru, Argentina, Japan and Northern Ireland. This comprehensive book is the definitive account of this extremely important subject.

Leornard Weinberg is Foundation Professor of Political Science at the University of Nevada. For his work in promoting Christian-Jewish reconciliation, he received the 1999 Thornton Peace Prize. His books include, The Democratic Experience and Political Violence (2001, edited with David Rappaport) and The Emergence of a Euro-American Radical Right (1998, with Jeffrey Kaplan).

Ami Pedahzur is a lecturer in the Department of Political Science, University of Haifa, Israel. His publications include The Israeli Response to Jewish Extremism and Violence (2002) and The Extreme Right-Wing Parties in Israel: Emergence and Decline? (2000).