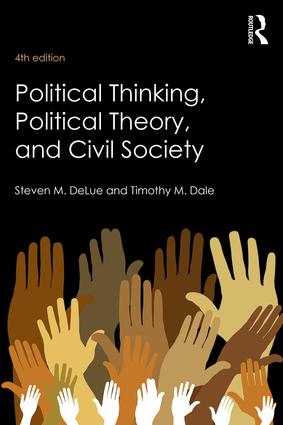 This comprehensive overview of the Western tradition of political thought approaches concepts with the aim of helping readers develop their own political thinking and critical thinking skills. This text is uniquely organized around the theme of civil society — what is the nature of a civil society? why is it important? — that will engage students and help make the material relevant. Major thinkers discussed in the text are explored not only with the goal of understanding their views, but also with an interest in understanding the relationship of their ideas to the notion of a civil society. DeLue and Dale contend that a civil society is important for securing the way of life that most of us value and want to preserve, a way of life that allows people to live freely and place significance on their own lives.

DeLue and Dale actively engage students not only in the discourse of Western political theory, but most importantly how they think about civil society: how it is and how it ought to be. The readings allow students to critically explore the relationship between individual citizens and non-citizens, governments, and non-governmental groups that both frame and signify core values and issues without the polarization of popular politics today. Their approach allows students to question and develop their political ideas, which is the purpose of a liberal arts education.

Steven DeLue and Timothy Dale have produced a comprehensive textbook that lays an excellent foundation in political theory. Building on the success of previous editions, the authors brilliantly present a thorough, fair treatment of the political theory canon and beyond. Through the application of classical, modern and postmodern traditions in political philosophy to the core concept of civil society, DeLue and Dale accomplish what few other texts have been able to achieve: a textbook that is accessible, interesting and useful for students. This is the ideal textbook for teaching and learning political theory.

is Associate Professor of Political Science and Public Administration at the University of Wisconsin--La Crosse.