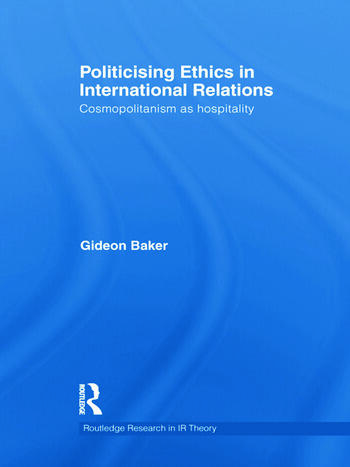 Addressing issues of central concern for those who seek to understand our obligations to strangers, this book will be of interest to students and scholars of international relations, security studies, ethics, and political and international theory.

Gideon Baker is Associate Professor in Politics and International Relations in the Department of Politics and Public Policy, Griffith University, Queensland, Australia.

‘Lucidly written and theoretically sophisticated, Politicising Ethics offers a comprehensive discussion of hospitality in international relations. Baker eschews the extremes of universalism and particularism, as well as the tendency to reduce questions of hospitality to matters of either charity or justice. Instead, he convincingly re-introduces the issues at stake as deeply political in nature, requiring judgments and decisions that cannot be relegated to pre-established principles.’ - Roland Bleiker, Professor of International Relations, University of Queensland

‘Denaturalizing the debased ways in which liberal democracies receive and relate to their strangers, Baker’s book articulates the more hopeful possibility of a ‘politics of the welcome’, one which offers a substantial contestation of the biopolitical logics of modern (in-)hospitality practices.’ - Julian Reid, Professor of International Relations at the University of Lapland, Finland, and author of The Liberal Way of War (Routledge 2009) and The Biopolitics of the War on Terror (Manchester University Press, 2006).

‘From Odysseus to Derrida, from the polis to the cosmopolis, Gideon Baker offers a genuinely stimulating genealogy of hospitality. Equally adept at engaging with contemporary moral and political philosophy as he is at extracting insights from literature, mythology, and the history of political thought, Baker presents the most comprehensive and important treatment yet in International Relations of hospitality’s ethical and political stakes. Politicizing Ethics in International Relations: Cosmopolitanism as Hospitality is an engaging, erudite, and thought-provoking study of the enduring dilemmas that flow from encounters with strangers.’ - Richard Devetak, Senior Lecturer in International Relations and Director of the Rotary Centre for International Studies in Peace and Conflict Resolution, University of Queensland.

'Baker's comprehensive rethinkingof the cosmopolitan project develops a form of cosmopolitanism that explicitly disavows the option of transcendence in relation to this dichotomy. Rather than retell another 'depressingly familiar' version of the dialectical schema characteristic of statist and globalist resolutions, Baker works within the site of this productive tension between identity and difference in oder to open up the political space for negotiation between each extreme in a way that is irreducible to either option.' -Corey Ranford-Robinson, Millennium