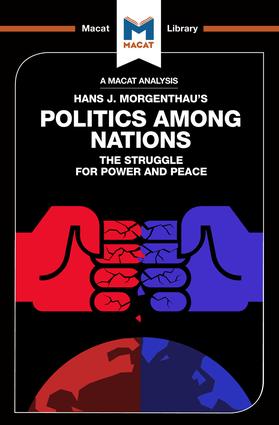 Hans Morgenthau’s Politics Among Nations is a classic of political science, built on the firm foundation of Morgenthau’s watertight reasoning skills.

The central aim of reasoning is to construct a logical and persuasive argument that carefully organizes and supports its conclusions – often around a central concept or scheme of argumentation. Morgenthau’s subject was international relations – the way in which the world’s nations interact, and come into conflict or peace – a topic which was of vital importance during the unstable wake of the Second World War. To the complex problem of understanding the ways in which the post-war nations were jostling for power, Morgenthau brought a comprehensive schema: the concept of “realism” – or, in other words, the idea that every nation will act so as to maximise its own interests. From this basis, Morgenthau builds a systematic argument for a pragmatic approach to international relations in which nations seeking consensus should aim for a balance of power, grounding relations between states in understandings of how the interests of individual nations can be maximized.

Though seismic shifts in international politics after the Cold War undeniably altered the landscape of international relations, Morgenthau’s dispassionate reasoning about the nature of our world remains influential to this day.

What does Politics Among Nations Say?

Why does Politics Among Nations Matter?

Dr. Ramon Pacheco Pardo is Senior Lecturer in International Relations at King’s College London. He holds a PhD in International Relations form the London School of Economics and is a research associate at the Lau China Institute and the Global Studies Institute in Hong Kong. Dr Pacheco Pardo has held visiting positions at the Lee Kuan Yew School of Public Policy and Korea University, and sits on the editorial board of Global Studies Journal.