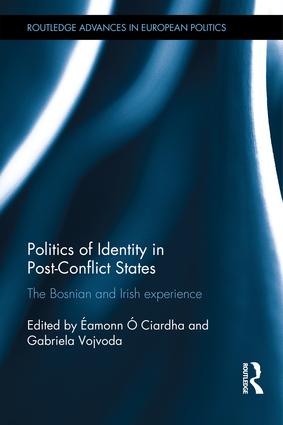 Politics of Identity in Post-Conflict States

Ireland and the Balkans have come to represent divided and (re)united communities. They both provide effective microcosms of national, ethnic, political, military, religious, ideological and cultural conflicts in their respective regions and, as a result, they demonstrate real and imaginary divisions.

This book will specifically focus on the history, politics and literature of Bosnia-Herzegovina and Northern Ireland, while making comparative reference to some of Europe’s other disputed and divided regions. Using case-studies such as Kosovo and Serbia; Lithuania, Germany, Poland, Russia and Belarus; Greece and Macedonia, it examines ‘space’, ‘place’ and ‘border’ discourse, the topography of war and violence, post-war settlement and reconciliation, and the location and negotiation of national, ethnic, religious, political and cultural identities.

The book will be of particular interest to scholars and students of cultural studies, history, politics, Irish studies, Slavonic studies, area studies and literary studies.

1 IntroductionÉamonn Ó Ciardha and Gabriela Vojvoda Section I The Impact of Empire on Ireland and the Balkans 2 ‘Dangerous Fumes’: Religion, Tobacco and the English Colonial Mind in the 17th Century Matthias Bähr 3 War and Division in the Golden Valley: Sarajevo's Twentieth Century Cathie Carmichael 4 The Lies My Diary Told: Use of Autobiography in the Study of Mixed Marriage in the Former Yugoslavia Fedja Burić 5 Traitors Within and Bridges across Derry and Mostar: An Exploratory Comparison Brendan O’Leary 6 War and a Herzegovinian town: Mostar’s Un-bridged Divisions Gerard Toal 7 Northern Ireland in a Balkan Perspective: The Cultural Dynamics of Complex Conflicts Jennifer Todd Section II City Infrastructure, Culture-specific Architecture and Natural Boundaries 8 Our Side, Their Side and All Those Places In-between: Neutrality and Place in a Divided City Ana Aceska 9 Rubbers, pens and crayons. Rebuilding Mostar though art interventions Giulia Carabelli 10 Mitrovica: A City (Re)shaped By Division Jaume Castan Pinos 11 The New "Old" Face of Skopje: Photo-Essay on the Rise and Demise of a Balkan City Rozita Dimova 12 The Neman River: The Multicultural Diversity of the River’s Space Rūta Eidukevičienė 13 Catchment Identity, Connections and Water Governance in the Contested Landscapes in Northwest Ireland Liam Campbell 14 The ‘New Ulster’ Project: Culture, Reform and Crisis 1945-72 James Loughlin 15 Immigration, Race and Ethnicity in an Already Divided Society: Dealing with ‘New’ Diversity in Northern Ireland Philip McDermott Section III Space, Place, Location and Border in the Literatures and Identities of Bosnia-Herzegovina and Northern Ireland 16 Trashing (Ethno-)Nationalism. Writing about the War in Contemporary Bosnian literature Elena Messner 17 A Funeral, a Wolf and Bruce Lee in Mostar: Revised Urban Contract and the Intersection of Time and Space Miranda Jakiša 18 Belfast Memories: Narrating the Self in Owen McCafferty’s Dramatic Oeuvre Eva Michely 19 (Re)locating Identities in the Post-Conflict Literatures of Mostar and Derry/Londonderry Gabriela Vojvoda

Éamonn Ó Ciardha is Senior Lecturer in the School of Irish Language and Literature at the Ulster University.

is a Research Assistant at the Visiting Professorship Europaicum and Lecturer at the University of the Saarland.