Politics of Religion and Nationalism
Federalism, Consociationalism and Seccession 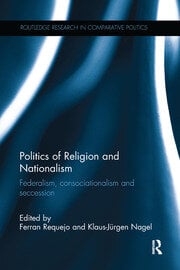 Politics of Religion and Nationalism: Federalism, Consociationalism and Seccession

There are numerous examples of how religion and nationalism intertwine. In some cases, a common religion is the fundamental marker of a nation’s identity, whereas in others secular nationalism tries to hold together people of different religious beliefs.

This book examines the link between religion and nationalism in contemporary polities. By exploring case studies on India, Russia, Israel, Canada, Chechnya, Bosnia-Herzegovina, Belgium, Northern Ireland, Scotland, Sri Lanka, Catalonia and the Basque Country, it seeks to understand the relationship between these two key societal forms of diversity and assess the interaction between religious and nationalist perspectives. Expert contributors examine a variety of phenomena, including secular nationalism, secessionism, and polities in which religious pluralism is evolving.

This book will be of interest to students and scholars of political science, religion and politics, nationalism, federalism, secession, political philosophy, racial and ethnic politics and comparative politics.

1. Nationalism and Religion. Friends or Foes? Klaus-Jürgen Nagel and Ferran Requejo 2. Governments and God(s): A Provisional Taxonomy Brendan O’Leary 3. Religious Pluralism in Russia Anastassia Obydenkova 4. Religious Pluralism and Political Accommodation in India George Mathew 5. Nationalism, land and religion in Israel Alberto Spektorowski 6. Religious Pluralism and Multinational Federalism in Bosnia and Herzegovina Soeren Keil 7. Chechnya: the Islamization of a Secession Aleksandar Pavković 8. Sectarianism, ethno-national conflict and the Northern Ireland problem Adrian Guelke 9. Ethnoreligious Nationalism and the Rejected Federalism of Sri Lanka Suren Raghavan 10. The Quebec Charter of Values : Using the French concept of laïcité to create a clash with the Canadian Multiculturalism Louis-Philippe Lampron 11. He will inspire us with courage and bring our enemies to nought: Religion and nationalism in Scotland Michael Rosie 12. Accommodating Flemings and Francophones in a Federal Arrangement: The Cultural and Religious Dimension of the Belgian Experience Frank Delmartino 13. Religion and Nationalism: the Basque Country as a Case Study Francisco Letamendia 14. Religion and the Political Accommodation of Catalonia. A Non-Relation? Klaus-Jürgen Nagel

is Professor of Political Science at Universitat Pompeu Fabra in Barcelona, Catalonia, Spain.