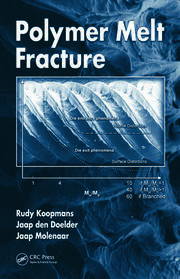 The continually growing plastics market consists of more than 250 million tons of product annually, making the recurring problem of polymer melt fracture an acute issue in the extrusion of these materials. Presenting a pictorial library of the different forms of melt fracture and real industrial extrusion melt fracture phenomena, Polymer Melt Fracture provides pragmatic identification and industrial extrusion defect remediation strategies based on detailed experimental and theoretical findings from the last 50 years.

Each chapter in this comprehensive volume covers a different aspect of the science and technology relating to polymer melt fracture. The book begins with a collection of optical and scanning electron microscopy pictures. These photos show distorted capillary die extrudates for a number of commercially available polymers. The authors present a brief introduction to the basic science and technology of polymers. They explain what polymers are, how they are made, and how they can be characterized. They also discuss polymer rheology, review the principles of continuum mechanics, and define linear viscoelastic material functions.

Techniques for observing and measuring fracture

Recognizing the importance of models for simulations that may indicate potential solutions, the book discusses aspects of non-linear constitutive equations and microscopic theory and develops a macroscopic model, explaining the capabilities and limitations of this approach. The book presents an overview of pragmatic tools and methods that have been used to prevent the appearance of polymer melt fracture and explains how to use them to suppress defects.

Rudy Koopmans received his PhD in physical and macromolecular chemistry from the University of Antwerp in Belgium. He is a fellow in the Basic Plastics R&D organization of The Dow Chemical Company located in Horgen, Switzerland. Since joining Dow in 1983, he has held various R&D positions in Europe and the United States. His main R&D focus is on materials development, polymer processing, and developing innovative technology solutions to market needs and identified market trends. In addition, he holds a visiting professorship at Leeds University in the United Kingdom in the Department of Chemical Engineering. He has published more than 50 peer-reviewed papers in international journals and books, and is a holder of multiple patents.

Jaap den Doelder received his MSc in applied physics and applied mathematics at Eindhoven University of Technology in the Netherlands. He received his PhD in applied mathematics at the same university in 1999 on the topic of polymer melt fracture. The same year, he joined The Dow Chemical Company in Terneuzen, the Netherlands. He has since worked on a variety of topics related to materials science and modeling of polymers, connecting application requirements to molecular design. He is currently a research scientist in Dow’s polyethylene business.

Jaap Molenaar studied mathematics and theoretical physics at Leiden University in the Netherlands and wrote a PhD thesis on the field of solid state physics. For more than a decade he was involved in mathematics consulting. He received the Neways Award for his work on academic knowledge transfer to industry. He specializes in the modeling of dynamical systems in terms of differential equations and has published several books on these topics. His research focuses on fluid mechanics, in particular polymer melt flow. Recently, he became active in systems biology. He is a full professor in applied mathematics and the head of department for Mathematical and Statistical Methods for the Life Sciences of Wageningen

University and Research Centre in the Netherlands.